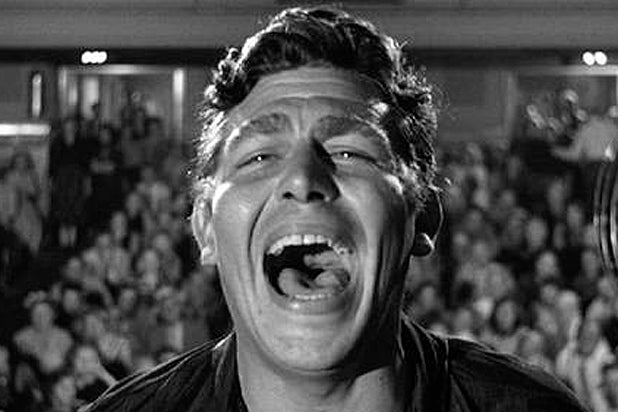 It seems that these days we watch the duplicitous face of Richard Nixon — refusing to resign, denying all charges — as often as when he was in Watergate hell. We also are once again seeing footage of Bill Clinton giving his “I did not have sexual relations with that woman” testimony. Those are the real historical figures that political journalists are comparing to our current leader, Donald Trump, as he faces special counsel Robert Mueller — and Stormy Daniels.

As for the reel ones, history also offers films that reflected Trumpish behavior. “Network” often is the handiest comparison, with its prescient and dire warning about reality TV, and a main character who becomes a national hero by picking up on the rage out there. (A theatrical version, starring Bryan Cranston, has been a huge hit in London.) Some also refer to “Being There,” in which Peter Sellers’ intellectually limited gardener mimics what he hears on television, and seduces powerful people with simplistic statements. (“In the garden, growth has its seasons.”)

Ron Chernow’s current best-selling biography of Ulysses S. Grant uncovers a former president who is more in sync with the current one than either Nixon or Clinton. No, we are not referring to the man of the title, and certainly not to Abraham Lincoln, who was the general’s partner in ending the Civil War. We are referring to the man who stepped up to the presidency when Lincoln was killed. That would be vice president Andrew Johnson, who became the nation’s 17th president. Until he wasn’t.

Just read some of Chernow’s passages about Johnson: “The president exploited the occasion to rant against his foes in a wild-eyed, intemperate, egotistical manner.” “He denounced Sumner and Stevens and Phillips as disunionists and traitors.” Chernow reports that critical departments under Johnson were “chronically understaffed,” and writes that the president “admitted to having owned slaves but boasted of never having sold one.”

The media of the time covered his exploits, but were always more favorable to and focused on U.S. Grant, who they, along with the majority of ordinary citizens, clearly saw as the next president. Mentioning the “I” (as in impeachment) word, Chernow writes, “It would take much longer to accomplish that goal, but the rabidly partisan speech polarized the capital in a way that foreshadowed that harrowing outcome.”

Also Read: Jimmy Kimmel Says Trump Would Love 'Shape of Water': 'It's About a Monster That Has Sex with a Woman Who Can't Talk About It' (Video)

Our fictional choice for a better Trump role model is one Lonesome Rhodes, portrayed by Andy Griffith in the great 1957 film “A Face in the Crowd” (which is now being developed as a Broadway musical. These can’t be coincidences.) Lonesome has grown up more like Andrew Johnson — a good old Southern boy — but he is plucked by a savvy media spotter, and, as film critic Leonard Maltin wrote, “is promoted into a successful and unscrupulous TV star.”

It does not take a genius to see parallels here. Speaking of the public, Lonesome says, “I could make them eat dog food and think it was steak.” “I’ll say one thing for him,” says another character, “he’s got the courage of his ignorance.” Lonesome is gradually abandoned by everyone, including the woman who loved him. In the final scene of the film, he is high in his penthouse, alone, venomously shouting into the empty air.

Close your eyes and place that penthouse on Fifth Avenue. Watch Ivanka and Melania slam the door one last time, and imagine a man alone, tweeting into the void.

Today’s political and entertainment journalists are on the Trump trail 24 hours a day. And he knows it. Referring to the Oscars’ poor ratings, he tweeted that it was because there are no stars anymore. “Except the president. Just kidding, of course!” Two men who were stars for a moment and shared many of Trump’s traits — Andrew Johnson and Lonesome Rhodes — did not ultimately weather their storms.

We asked Ron Chernow if he wanted to make any predictions after his book’s publication. “I see parallels with Trump,” he said wryly. “It is an essay worth writing.”