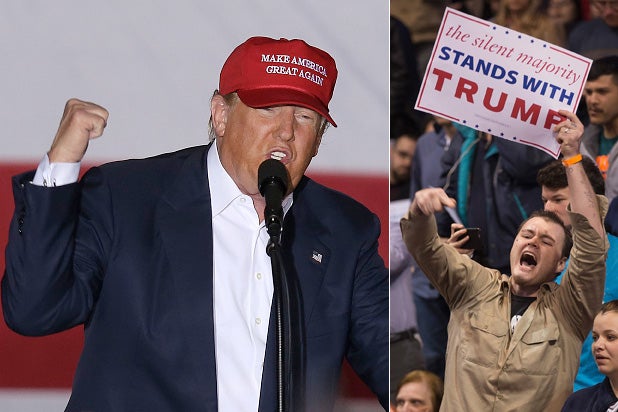 The anger unleashed by the Donald Trump campaign is not merely the result of the Republican Party’s pandering to bigotry and intolerance over a decade although, yeah, it’s that too.

It’s the direct result of the culture wars in America, which the right wing has been losing for decades and continues to lose, bit by bit. Now they’re losing their minds.

The chaos and frustration being expressed at Trump rallies is like some giant roar from the id of the forgotten American middle class, and particularly the put-upon white male. It makes me think of the Michael Douglas character in “Falling Down” — a laid-off defense worker whose wife has left him and whose life then goes even further downhill. That was 20-plus years ago and things have only gotten worse for middle-class men since then.

Also Read: John Oliver on Donald Trump As Presidential Candidate: 'None of Us Thought We Were Going to Be Here' (Video)

What happened to the America of yore? Have “New York values” — or even “Hollywood values” — won out?

Well, yes, they have.

Terrifying but true: Women are sexually liberated. They can have sex with whomever they want. And what happens when you can’t control people’s sexual habits? Nothing terrible, it turns out, but that’s infuriating too!

The gays are out of the closet. Hell, they’re getting married and having children.

A black man has been in the White House for eight years along with his black wife and children. Not that there’s anything wrong that, of course, but does he have to be such a p…..rofessor?

Recreational marijuana is an accepted drug. Some guy named Lin-Manuel Miranda was rapping in the Rose Garden this week. All this claptrap about global warming when jobs have disappeared to China and Vietnam and the government bails out the banks who foreclosed on all those mortgages.

And more: The Catholic Church is discredited, its authority and finances crippled by the exposure of pedophile priests and the attendant cover-up. The evangelical church should be a haven, but try not to notice the many leaders there who were convicted of fraud, or gay-bashers who turned out to be gay.

And what about all those boys coming back from Iraq and Afghanistan, with scar tissue for faces and prosthetics in place of their limbs?

Also Read: Ben Carson Admits He 'Would Have Preferred' Not to Endorse Donald Trump

When those bedrock institutions — the government, the church, the banks — fail you, what can you count on anymore?

The country has changed and parts of the country are rebelling against those changes. The culture wars are not over, certainly, but the prospect of a Democratic appointment filling Antonin Scalia’s seat on the Supreme Court may cement the progressive realities that have taken hold over the past 30 years.

Women will not give up the right to make choices for their own bodies, though yes, abortion-rights battles are being waged in Texas, Louisiana and a dozen other states. Gays aren’t going back in the closet. People of color and those who support them are in the streets demanding reform in police departments nationwide.

So Trump has come along and validated the base instincts of those who feel disenfranchised and betrayed. I understand it. The New Yorker’s David Remnick called it the result “of a long process of Republican intellectual decadence.”

But you can also blame “All in the Family,” “Seinfeld,” “Will and Grace” and “Modern Family.”

It’s an “I Dream of Jeannie” genie that’s not going back in the bottle.