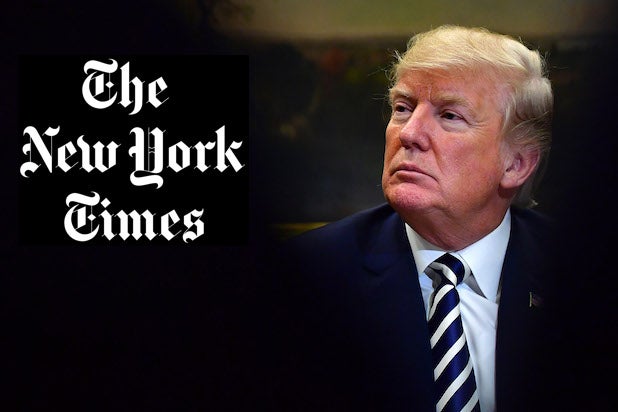 President Donald Trump praised former New York Times Executive Editor Jill Abramson in a tweet Saturday, saying her critiques of the paper’s coverage and business in recent days have been accurate — particularly with regards to him.

The tweet will only likely stoke sales for Abramson’s upcoming book about the Times and media business “Merchants of Truth.” Leaked excerpts appear to be a highly critical assessment of her former employer and successor in the top job, Dean Baquet.

An excerpt first reported by Fox News caused a stir last week after Abramson said the paper had allowed too much anti-Trump bias to permeate the pages.

“Though Baquet said publicly he didn’t want the Times to be the opposition party, his news pages were unmistakably anti-Trump,” Abramson wrote. “Some headlines contained raw opinion, as did some of the stories that were labeled as news analysis.”

Abramson was fired from The Times after losing out in an internal power struggle to Baquet in 2014.

Another nugget obtained by Fast Company said that the paper’s publisher wrote a letter “all but apologizing” to the government of China after one particularly tough story.

The Times did not immediately respond to request for comment from TheWrap. In a response to Fast Company, the Times disputed Abramson’s account.

No, the account isn’t accurate and the publication of this 2012 story is a powerful example of the Times’s deep commitment to publishing stories in the public interest without regard to potential financial impact. We published this story knowing in advance that our Chinese-language website, which had launched just months before, would be shut down-it remains shut down today. We’ve vigorously protested the shutdown and continue to fund the website to send a clear signal that our journalists cannot be silenced in retaliation for their coverage.

Ms. Abramson is 100% correct. Horrible and totally dishonest reporting on almost everything they write. Hence the term Fake News, Enemy of the People, and Opposition Party!

In her own response on Twitter, Abramson shot back at Trump, saying her praise of the paper far outweighed the criticism.

“Anyone who reads my book, Merchants of Truth, will find I revere @nytimes and praise its tough coverage of you,” she said.