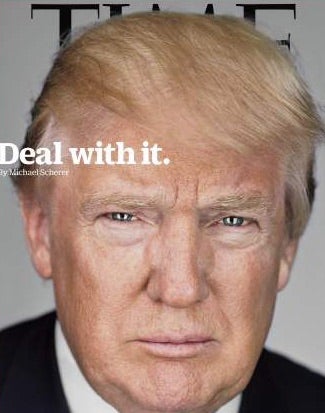 Time magazine’s new cover boldly declares “The Donald Has Landed: Deal With It.” And Trump makes quite a few new declarations in the 3,049-word piece.

“I don’t think the people running for office are real,” the GOP frontrunner told the magazine about his challengers’ penchant for hiring consultants. “They have to throw a lot of consultants away and be themselves. I think it is one of the things that has helped me.”

“Trump won’t hire a pollster, and he has let go about as many senior people from his campaign in the past month as he has hired,” Scherer wrote. “He does his own debate prep, doesn’t spend on advertising, refuses to seek big campaign contributions and says he gets military advice from watching pundits jabber on television.”

“He can’t really finish three sentences without bragging about his business deals, his Ivy League education, his golf scores or his place in the polls.”

And the Donald is so confident in his star power, he posed an interesting hypothetical for the next GOP debate on CNN.

So if I go to CNN and I say, Look, you’re going to have a massive audience, and if I say to them, I want $10 million for charity, nothing for myself, what happens? I’m not showing up, right?” he says. It’s a rhetorical question, the wheels of entrepreneurship are turning, the joy of being Trump dancing on his face. “I’m not showing up unless you give $10 million to cancer, to this, to that. You pick 10 great charities, $1 million per.” He’s not sure just how far the rules of democracy can bend, how big his ambitions can grow. “If I’m in it, they’ll get this crazy audience, and they’re going to make a fortune since they’re selling commercials every time we take a break. Would you ever say to them, would you ever say, I want $10 million for AIDS research, for cancer, for this type or not, or is it too cute?”

“Before I even start the wall, I’m going to get the bad ones out,” Trump said about his proposal to toss “bad” illegal immigrants out of the country.

The piece reported that Trump’s controversial comments about Mexican immigrants being rapists and drug lords cost him more than a dozen business partnerships — including the 2015 Miss Universe broadcast and a Serta ­mattress branding deal — and millions of Latino votes (he still vows he’ll win the Latino vote).

When asked about what mistakes he’d concede to making so far in the campaign, the Donald pointed to the polls: “Every time somebody says I made a mistake, they do the polls and my numbers go up…so I guess I haven’t made a mistake.”

You can read the full piece here.