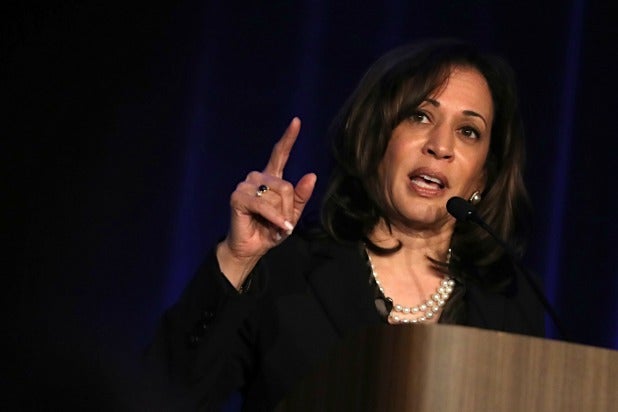 Sen. Kamala Harris called upon Twitter CEO and co-founder Jack Dorsey to “do something about” Donald Trump’s tweet in which he described the impeachment inquiry a “coup.”

On Tuesday evening, the President tweeted that he had come to the “conclusion that what is taking place is not an impeachment, it is a COUP, intended to take away the Power of the People, their VOTE, their Freedoms, their Second Amendment, Religion, Military, Border Wall, and their God-given rights as a Citizen of The United States of America!”

As I learn more and more each day, I am coming to the conclusion that what is taking place is not an impeachment, it is a COUP, intended to take away the Power of the….

A coup, by definition, is a “sudden, violent, illegal seizure of government.” One week ago, the House of Representatives launched an impeachment inquiry into Trump following a whistleblower complaint that the president sought help from Ukraine’s leadership for his own political gain.

Harris, who is a Democratic presidential candidate, responded to Trump’s “coup” tweet by tagging Dorsey. In her response, she tweeted, “Hey, Jack. Time to do something about this.”

Hey, @jack. Time to do something about this. https://t.co/es2fJ5PNRV

While Harris did not specify what action Dorsey should take, on Monday she tweeted that Trump’s Twitter account should be suspended. Dorsey did not respond to Harris’ tweet.

Back in January 2018, Twitter published a blog post specifically addressing the suspension or banning the accounts of world leaders. Twitter said: “Blocking a world leader from Twitter or removing their controversial Tweets would hide important information people should be able to see and debate. It would also not silence that leader, but it would certainly hamper necessary discussion around their words and actions.”

TheWrap reached out to Twitter for comment. The social media platform is headquartered in San Francisco, where Harris served as district attorney before serving as the attorney general of California.

Harris’ fellow Democratic candidates did not address Trump’s coup comments. Joe Biden instead tweeted about how Trump has spent $10 million in attack ads against him in recent days, and that he’ll “beat him like a drum” in the 2020 election.

President Trump asked a foreign government to interfere in our elections, and now he’s spending $10 million on attack ads against me. It’s clear that he is trying to influence the primary and pick his opponent.

Why? Because he knows I’ll beat him like a drum.

Trump has been extremely active on Twitter since the impeachment inquiry was announced, denouncing the Democratic party and news media. He has elevated his language describing the impeachment as “harassment” to a “witch hunt” and now a “coup.”