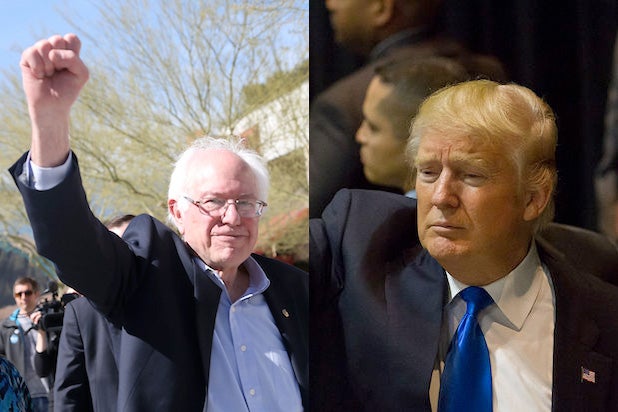 Donald Trump delivered a knockout punch in the Indiana primary on Tuesday with his seventh straight win and driving his strongest challenger, Texas Sen. Ted Cruz, to end his campaign for the Republican nomination.

On the Democratic side, Bernie Sanders earned a surprise victory over Democratic presidential frontrunner Hillary Clinton, winning 53 percent of the vote to her 47 percent for the former secretary of state with 98 percent of precincts reporting.

But the Vermont senator’s upset is unlikely to alter the Democratic contest since the state’s delegates are allocated proportionally and Sanders still trails Clinton by more than 300 delegates.

At the closing of the polls, Trump claimed at least 45 of the state’s 57 Republican delegates up for grabs, according to AP. With 98 percent of the vote counted, Trump had nearly 53 percent of the vote, followed by Cruz with 37 percent and Ohio Gov. John Kasich with 7 percent.

Just hours after networks and news outlets project Trump’s decisive win in Indiana, Cruz announced he was formally dropping out of the race.

Reince Priebus, chairman of the Republican National Committee, declared Trump the “presumptive GOP nominee” and urged voters to unite in an effort to defeat Hillary Clinton.

“.@realDonaldTrump will be presumptive @GOP nominee,” Reince Priebus tweeted. “We all need to unite and focus on defeating @HillaryClinton#NeverClinton.”

Indiana, a political afterthought during most presidential elections, has emerged as one of the most crucial battlegrounds in this year’s primary race as Trump tries to reach the 1,237 delegates needed to clinch the nomination outright and Clinton looks to prove that she can win over Sanders supporters in a state with a large number of blue-collar white voters.

The loss in Indiana spelled disaster for Cruz, who made a concerted effort to slow Trump’s momentum by joining forces with Ohio Gov. John Kasich and stepping up his criticism of the GOP frontrunner in recent days.

Going into Tuesday’s primary, Trump had 996 delegates, Cruz had 565, while Kasich had 153 delegates, according to the Associated Press. On the Democratic side, Clinton had 2,165 (including 520 superdelegates), while Sanders had 1,357 (including 39 superdelagates).

Preliminary exit poll results from Indiana’s Democratic primary showed higher than usual turnout this year among liberals, young voters, whites and those focused on a candidate who’s honest or cares about people like them.

More than seven in 10 voters were whites, according to the exit polls, while nearly half of voters were under age 45, numbers that usually favor Sanders over Clinton.

On the Republican side, exit polls showed a greater-than-average support for an outsider candidate and for deporting undocumented immigrants. A majority of voters also said they were interested in a candidate who’ll “bring needed change” or “tells it like it is.”