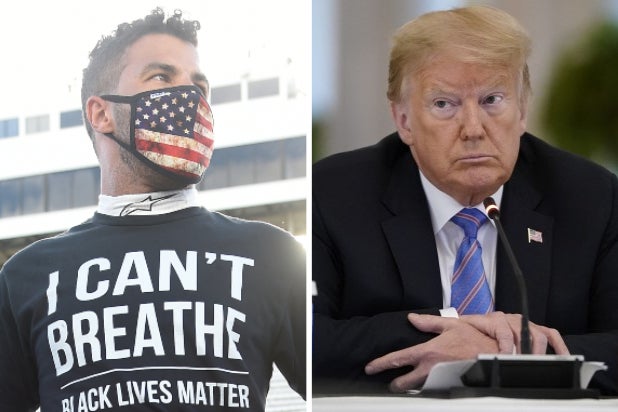 Donald Trump lashed out at NASCAR driver Bubba Wallace, the league’s only full-time Black driver, saying that Wallace should apologize to NASCAR officials and drivers after an FBI investigation found that a rope resembling a noose found in his garage was not the result of a hate crime.

Trump referred to the noose situation as a “HOAX” and additionally criticized NASCAR for its decision to ban the Confederate Flag from its events.

“Has @BubbaWallace apologized to all of those great NASCAR drivers & officials who came to his aid, stood by his side, & were willing to sacrifice everything for him, only to find out that the whole thing was just another HOAX? That & Flag decision has caused lowest ratings EVER,” Trump tweeted on Monday.

Wallace responded to Trump’s tweet with a statement directed at “the next generation of little ones following my foot steps.”

“Your words and actions will always be held to a higher standard than others. You have to be prepared for that,” Wallace said in a statement. “Always deal with the hate being thrown at you with LOVE! Love over hate every day. Love should come as naturally as people are taught to hate. Even when it’s HATE from the POTUS.”

On June 21, members of Wallace’s team found a rope fashioned into a noose in his garage. Wallace and NASCAR were notified immediately and the organization launched an investigation.

While the FBI found that Wallace “was not the target of a hate crime” in its investigation, adding that photographic evidence showed that the rope was in his garage stall “as early as last fall.” Wallace however stood by his position that the rope was a noose and that it was not an ordinary garage pull. His garage was also the only one whose rope was tied in that fashion.

“From the evidence that we have — that I have — it’s a straight-up noose,” Wallace told Don Lemon of the rope found in his garage stall. “I’m pissed. I’m mad because people are trying to test my character and the person that I am and my integrity. They’re not stealing that from me, but trying to test that and as a person that doesn’t need the fame or the hype or the media, I could care less. I give two craps about that.”

On Fox on Monday morning, White House press secretary Kayleigh McEnany compared the Wallace situation to Jussie Smollett and said that the president was pointing out the media’s rush to judgment on facts.

“What the president is making is a broader point that this rush to judgment on the facts before the facts are out is not acceptable. We saw it with the Covington kids, we saw it with Jussie Smollett, and now we saw it in this case,” McEnany told Fox’s Sandra Smith.

NASCAR following the FBI investigation released a photo of the rope found in Wallace’s garage, which you can see below, as well as Wallace’s response:

NASCAR releases photo to the media of the garage pull rope formed as a noose from the Bubba Wallace garage Sunday at Talladega Superspeedway.
This image was provide by NASCAR. pic.twitter.com/Z4ZyBzpREF

To the next generation and little ones following my foot steps..#LoveWins pic.twitter.com/tVaV3pkdLe