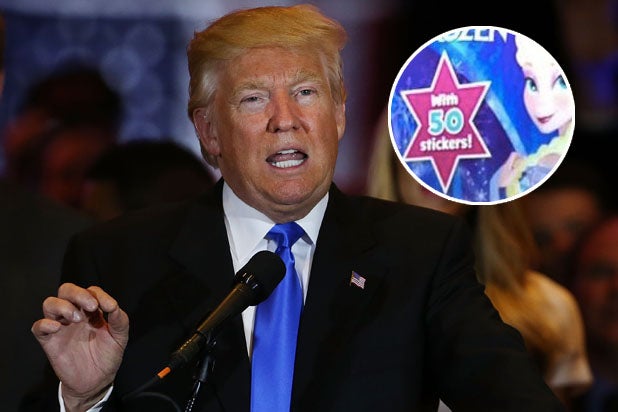 Criticized for sharing a meme that some find anti-Semitic, Donald Trump is trying to defend himself by pointing at a Disney blockbuster.

“Where is the outrage for this Disney book? Is this the ‘Star of David’ also? Dishonest media! #Frozen,” the presumptive GOP nominee tweeted on Wednesday, along with a photo of a “Frozen” sticker book that has a six-pointed star on the cover.

His strange post came after his campaign took down a tweet that featured Hillary Clinton beside the words “Most Corrupt Candidate” superimposed over a six-pointed silhouette resembling a Star of David and a background of $100 bills.

The meme prompted the New York Observer’s entertainment writer to call out Trump’s son-in-law and the paper’s owner, Jared Kushner (who was raised in an Orthodox Jewish family) for supporting Trump.

“People can play ignorant, blame the corrupt liberal media for trying to ‘get’ Trump, but it takes only a basic knowledge of world history or an understanding of how symbols work to see a wall of cash, a Star of David, and the accusation of corruption and not see the subtext,” entertainment writer Dana Schwartz wrote.

Earlier on Wednesday, Trump made a defiant speech at a Cincinnati, Ohio, rally defending his meme, according to The New York Times.

“You shouldn’t have taken it down,” he recalled telling one of his campaign workers. “I said, ‘Too bad, you should have left it up.’ I would have rather defended it.”

“That’s just a star,” he repeated.

While Trump claimed the symbol on his meme was a sheriff’s star, his campaign deleted the tweet and republished the image with a circle instead.

Now it appears that he is determined to call out anyone else who inappropriately uses a six-pointed star — even Elsa and Anna.

Where is the outrage for this Disney book? Is this the 'Star of David' also?
Dishonest media! #Frozen pic.twitter.com/4LJBpSm8xa