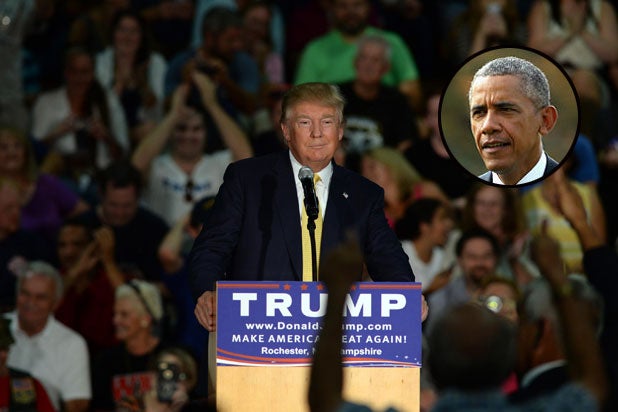 Donald Trump had plenty to say as always at the GOP presidential debate on Wednesday, but the following day he was stumped when a supporter alleged that President Barack Obama is Muslim and not an American.

“We have a problem in this country. It’s called Muslims,” the unidentified man said at a question-and-answer town hall event in Rochester, New Hampshire. “You know our current president is one. You know he’s not even an American.”

Trump seemed both bemused and bewildered, asking in a state of confusion: “We need this question? This is the first question?”

Trump has an infamous history of making inappropriate comments about immigrants and was also a proponent of the “birther” movement that claimed Obama wasn’t born in the U.S., having long doubted the validity of his birth certificate.

At Thursday’s town hall, the man wearing a “Trump” T-shirt continued: “Anyway, we have training camps growing where they want to kill us … That’s my question: When can we get rid of them?”

The real estate mogul-turned-presidential hopeful dodged the racist question and instead responded: “We’re going to be looking at a lot of different things.

Several reporters asked Trump after the event why he didn’t respond, but again he did not answer, according to CNN.

As usual, the Twitterverse had plenty to say and the hashtag “Obama is a Muslim” quickly trended on social media.

“What’s crazy is that people say Obama is a Muslim. Even crazier that this is supposed to be some kind of insult,” one user said.

Another stressed that Trump’s lack of response means that he is “not president material.”

What's crazy is that people say Obama is a Muslim. Even crazier that this is supposed to be some kind of insult. GOP base is insane.

Its sad that people still think Obama is a Muslim. Even if he were, who cares? Why does a persons beliefs matter to others?

"Obama is a Muslim" is apparently trending? Maybe he is a Muslim but has to hide it so he doesn't get arrested for wearing a watch

The only response should be: SO WHAT if Obama is a Muslim? #Equality vs. #Racism pic.twitter.com/3cfnWHZjnr

Why are people shocked that Trump agreed with his audience that Obama is a Muslim? This IS the GOP base, folks.

I hate that Obama is a Muslim is trending. Being a Muslim is not a negative thing. We are using racist language & it makes me uncomfortable

It would be fine to have a Muslim Pres. But the bigots who believe that Obama is a Muslim mean that he is not American, & that lie must die

OMG,1st ques. Muslim problem, Obama is a Muslim. Trump agrees and is going to look into this problem. Sorry, this man is not Pres material