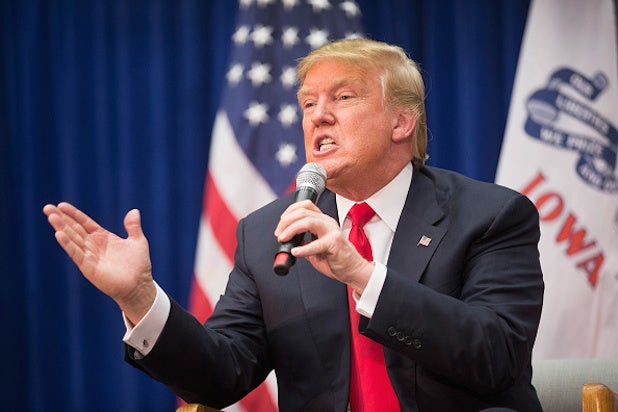 Also Read: Mitt Romney Slams Donald Trump as a 'Phony' and a 'Fraud'

Trump said Romney should have won against President Obama in 2012 but he “disappeared.”

“He was begging for my endorsement. I could have said, ‘Mitt drop to your knees’ and he would have dropped to his knees,” Trump said before he noted that Romney was “afraid of Jeb” and called the former Massachusetts governor’s second presidential campaign a “catastrophe.”

Trump, who returns to the Fox News debate stage tonight, spoke in front of an estimated 700 people who were reportedly waiting outside for up to six hours to enter the rally. He didn’t lead with Romney talk, however, and instead touched on some of his usual talking points to kick off the event.

Also Read: DEFCON Trump: 11 Republicans in Panic Mode and What They're Saying

Trump went on to respond to some of Romney’s allegations, including defending Trump University because it had a “98 percent approval rating.” The GOP frontrunner also said he owns a Gucci store in Manhattan that is worth more than Romney himself.

Trump mentioned raising money for Romney’s campaign with a fundraiser that was so successful that they had a second edition on the same day. However, ruined Trump’s carpet that day.

“Hey, maybe I can send Mitt a bill for carpet ruined,” Trump said. “You help somebody and then he turns. I will say this, he probably had a right to turn because nobody could have been nastier than me in getting him not to run [in 2016].”

Trump said Romney “doesn’t have what it takes” to be the president.

Romney warned that if Trump becomes the Republican nominee, the prospects for a safe future will be “greatly diminished,” calling the Republican frontrunner a “phony” and a “fraud” during a speech earlier in the day at the University of Utah.

“His promises are as worthless as a degree from Trump University,” Romney said. “He’s playing members of the American public for suckers: He gets a free ride to the White House and all we get is a lousy hat.”

Also Read: 'The View' Host Whoopi Goldberg Mocks Mitt Romney Over Trump Diss: 'Why Am I Listening to You?'

Romney’s speech was a last-ditch effort to try and stop Trump from running off with the GOP nomination. Romney has been extremely critical of Trump on social media in recent weeks, demanding that the business mogul release his tax returns and arguing that Trump was too slow to denounce the Ku Klux Klan.