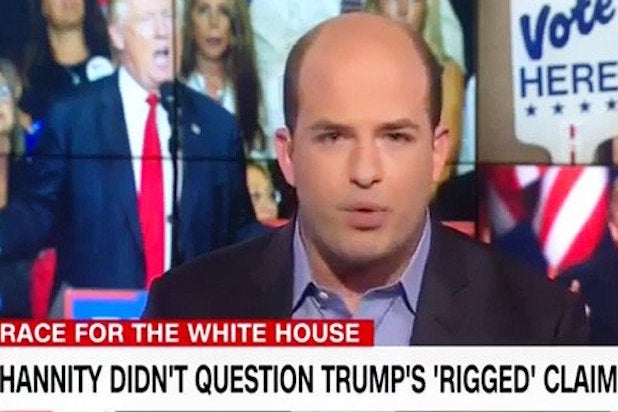 CNN’s Brian Stelter took on Sean Hannity for failing to ask Donald Trump tough follow-up questions after the GOP nominee said the election would be “rigged,” and the conservative Fox News host fired back on Twitter.

“Hannity is not a journalist, but he has a megaphone and he’s using his megaphone irresponsibly,” Stelter said on Sunday’s edition of “Reliable Sources” to kick off the beef. “It is unpatriotic for any interviewer or any journalist to help [Trump delegitimize the democratic process without proof].

Stelter received a ton of positive feedback on Twitter for his essay, but Hannity wasn’t among the people offering praise.

“Hey Brian check Philly enquirer after 2012. How many districts not a single Romney vote. Check Cleveland. Do u prep?” Hannity asked in his first tweet to Stelter, pointing to what he feels is proof of a rigged election in 2012.

“Calling us unpatriotic? 59 districts not one Romney vote,” Hannity wrote in another tweet. “So you are voting for the liar HRC. Did DNC hurt Bernie?”

Hannity then mocked Stelter, calling him “Unreliable liberal sources,” and asked again if “HRC is a liar.”

Just last week, Wall Street Journal editor Bret Stephens and Sean Hannity traded insults on Twitter. It all started when Stephens tweeted out a Yahoo article titled, “Hannity to GOP leaders: ‘I’m getting a little sick and tired of all of you,'” captioning the tweet, “Fox News’ dumbest anchor had a message for y’all.”

Hannity responded with a series of tweets including, “If Hillary wins I will hold a–holes like you accountable. You will be responsible for her Supreme ct [sic] selections.”

Hannity recently finished July with the third-most watched show among all of cable news, behind only colleagues Bill O’Reilly and Megyn Kelly.

Trump's talk about a "rigged election" is dangerous, and journalists should treat it that way, @brianstelter says https://t.co/MHZS5y0rLU

Hey Brian check Philly enquirer after 2012. How many districts not a single Romney vote. Check Cleveland. Do u prep? https://t.co/5XORZzkdXQ