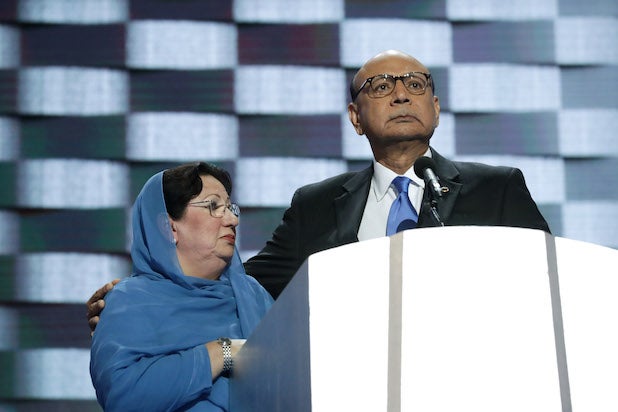 Ghazala Khan, the mother of a fallen U.S. soldier of Muslim faith, is responding to Donald Trump’s speculation that she didn’t speak at last week’s Democratic convention due to her religion.

“I can say that my religion or my family or my culture never stopped me saying whatever I want to say,” Khan said in an interview with CNN’s “New Day.” “And my husband is very supportive of me in these things that I have all the rights as a wife, as a mother, as a daughter.”

After Khan and her husband, Khizr, took the stage at the Democratic National Convention last week to deliver an emotional speech denouncing Trump’s proposed Muslim immigration ban, the GOP presidential candidate suggested that Mrs. Khan wasn’t allowed to speak because of her Islamic religion.

“If you look at his wife, she was standing there. She had nothing to say. She probably, maybe she wasn’t allowed to have anything to say. You tell me,” Trump said.

The Republican candidate received backlash for his comments, notably from Mrs. Khan.

The Khans’ son, Army Capt. Humayun, had served in Iraq and died during a suicide car bombing. They said Trump’s ban would have prevented their son from serving his country.