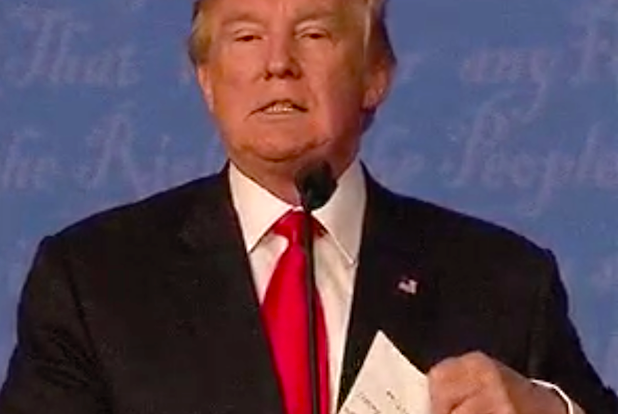 The verdict was swift — Wednesday night’s debate in Las Vegas was, by all accounts, Donald Trump’s worst performance yet.

CNN’s snap poll was unequivocal, declaring Hillary Clinton the winner by a whopping 13 points, a clean sweep across all three of this year’s presidential debates.

Trump tweeted his usual list of online polls after the Vegas debate, but not even those unscientific surveys were all on his side.  The one conspicuously missing? Brietbart’s poll, which — gasp! — proclaimed Clinton the winner (turns out Clinton supporters decided to teach The Donald a lesson and flooded Bretibart’s site after the debate).

But a quick private moment caught on camera at the end of Wednesday’s final face-off could be quite telling.

As Clinton walked in front of the cameras to shake hands with Fox News moderator Chris Wallace, Trump was caught tearing the pages of his notes, looking quite upset.

Now, he could have just been doing some last-minute shredding. Or … maybe not.

Whatever the reason, he doesn’t look like a guy who just nailed his most important debate performance.