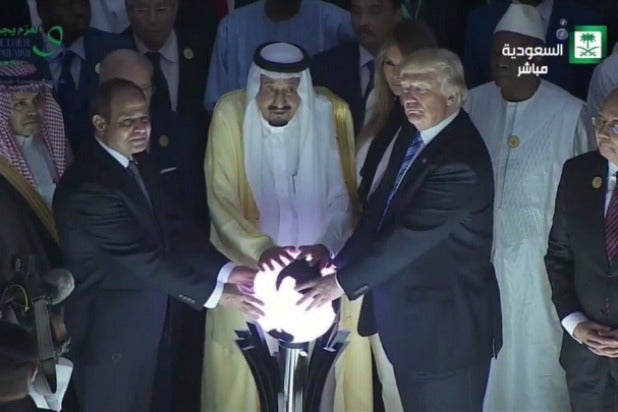 A picture is worth a thousand words… and if it’s a picture of Donald Trump surrounded by Saudi dignitaries in a darkened room, with the Egyptian president, King Salman and The Donald himself resting their hands on a glowing orb, you can bet it’s also worth a thousand tweets.

Although the photo does conjure up images that could be found on the editing room floor of a Marvel Universe masterpiece, it was taken Sunday while the POTUS was on his intercontinental diplomacy tour. After giving an anti-terrorism speech in Riyadh, Trump joined King Salman and Egyptian president Abdel Fata al-Sissi at the opening of the Global Center for Combating Extremist Ideology. During event, the three world leaders placed their hands on a glowing orb, which represents earth.

When the photo made it on-line, Twitter went berserk, and the photo went viral… as did the wise cracks.

Also Read: 24 Old, Angry Trump Tweets that Sound Like He's Mad at Himself

Wow, Trump just hasn't been the same since he touched that orb pic.twitter.com/qWLNNVk6Cp

One day yr bragging abt Gen Pershing &pigs blood bullets, next yr communing the orb of destiny with The Custodian of the Sacred Mosques. pic.twitter.com/6xZ1aDTcS5

Lots of snickering from armchair presidents who have never allowed themselves to be drained of their Life-Force to sustain the Great Orb https://t.co/Hs8vJsqYBm

Okay, am I the only one who is thinking Saruman and "Lord of the Rings?" https://t.co/nkzhqodriv

I see in your future … the Marshal of the Supreme Court! pic.twitter.com/HIYPX36Ilq

"What does it do?"
"It lets you go back in time and tweet warnings about the future to yourself." pic.twitter.com/fr6wYKZIrV

Also Read: Why Trump's Mar-a-Lago Is a Hacker's Delight Waiting to Happen

not all the palantiri were accounted for when Numenor was corrupted by Sauron and lost so it's always nice to see one come back into play pic.twitter.com/hBY2DDSmSs