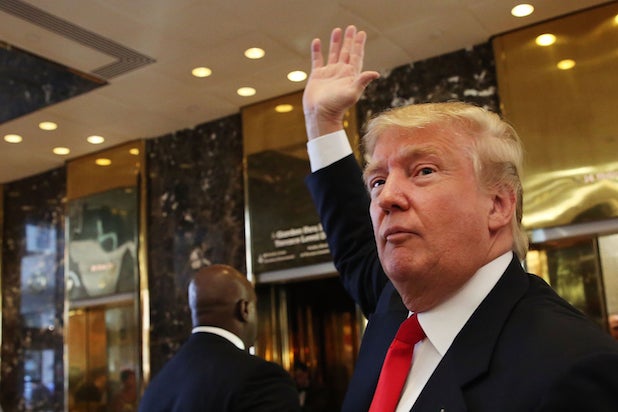 Donald Trump is hinting that he would strongly consider a third-party run if he doesn’t win the GOP presidential nomination… or if the Republican establishment doesn’t treat him right.

“The RNC has not been supportive. They were always supportive when I was a contributor. I was their fair-haired boy,” the business mogul told The Hill. “The RNC has been, I think, very foolish.”

Earlier this month, RNC Chairman Reince Priebus urged Trump to tone down his controversial rhetoric. The RNC also chastised him for saying that Sen. John McCain was not a war hero because he was captured and held as a POW during the Vietnam War.

Also Read: 'The View' Blasts Donald Trump Over Lindsey Graham Beef: 'You Can Dish It Out, But You Can't Take It'

Trump said that if the GOP establishment doesn’t change its attitude, the chances of him running as a third-party candidate would “absolutely” increase.

“So many people want me to, if I don’t win,” Trump said. “I’ll have to see how I’m being treated by the Republicans… if they’re not fair, that would be a factor.”

Trump also said the reason the GOP establishment in Washington dislikes him is because he’s not part of the D.C. political scene.

The real estate mogul turned Republican presidential candidate has flipped the race for the White House on its head. Latest polls show he’s leading the party’s field with many in the establishment unhappy about his controversial comments about Mexican immigrants and his incendiary comments on McCain.

But despite all the criticism, Trump seems to be connecting with GOP voters, at least for now.

“I’m surprised that I’m this high,” he said, referring to the latest polls.

Trump attributes his rising popularity to his blunt, tell-it-like-it-is approach.

“I’m not surrounded by all sorts of pollsters and PR people,” Trump said. “I speak the truth. Our country is in big trouble, and I know how to turn it around.”