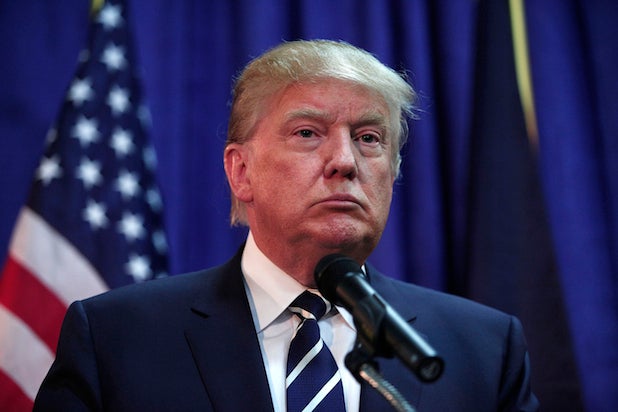 Donald Trump might already have a buyer for the Miss Universe Organization.

Trump, who announced Friday that he owns 100 percent of the Miss Universe Organization after buying out NBC’s stake in the company, is in talks to sell the organization to Ari Emanuel and Patrick Whitesell‘s WME/IMG, Bloomberg reported Friday.

A spokeswoman has not yet responded to TheWrap’s request for comment.

Also Read: 'The View's' Sherri Shepherd on Donald Trump: 'Decide If You're Running for President or You're an Entertainer'

In his announcement Friday, Trump teased that there was news to come, writing, “Stay tuned” in the tweet announcing his purchase.

It was not disclosed how much Trump paid to acquire the full company, and it is not known how much he might be preparing to sell the Miss Universe Organization for.

In his announcement earlier on Friday, Trump also said that he had settled all lawsuits regarding Miss Universe.

“Simply stated, Univision has no right to terminate its relationship with [the organization] and refuse to broadcast the upcoming Miss USA pageant,” the complaint read.

According to Trump, the agreement between Univision and the Miss Universe Organization “does not give Univision the right to terminate simply because it does not agree with Mr. Trump’s longstanding views or statements, all of which are protected under the First Amendment and have been echoed by many in this county.”

Trump’s lawyer also threatened legal action against NBC, which likewise cut ties with Trump. In addition to bouncing Trump from “Celebrity Apprentice,” the network said that it will no longer air the Miss Universe and Miss USA pageants, which were co-owned by its corporate parent NBCUniversal and Trump.

Instead, this year’s Miss USA contest ran on Reelz, where it drew 2.5 million total viewers, 3 million less than the pageant logged on NBC the previous year.

The pageant was also a money pit for Reelz, with network CEO Stan E. Hubbard telling TheWrap: “Did we break even on our financial investment? We did not.”