Donald Trump is in the lead against his political rival Hillary Clinton — at least among the trick-or-treat crowd.

With Halloween fast approaching, GOP presidential nominee Trump is winning the race among those dressing up as one of the candidates this year.

A spokeswoman for retailer Spirit Halloween told TheWrap on Thursday that its Cry Baby Trump mask is out-selling its #HBIC Hillary mask.

Granted, it’s a close race — while the Trump mask maintains its lead from last week, there is currently just a 1-point difference in sales between the two masks, according to Spirit Halloween.

Alas, Trump’s lead does contain a downside for the reality-TV personality-turned-politician.

A survey of 2,000 U.S. adults conducted by Spirit Halloween and Harris Poll last month, Trump is the clear front-runner among people considering dressing as a presidential candidate this year.

Also Read: Scott Baio Defends Donald Trump's Crass Comments With Some Sexism of His Own (Video)

According to the survey, 55 percent of respondents would choose dress as Trump, as opposed to 45 percent who would dress up as Clinton. 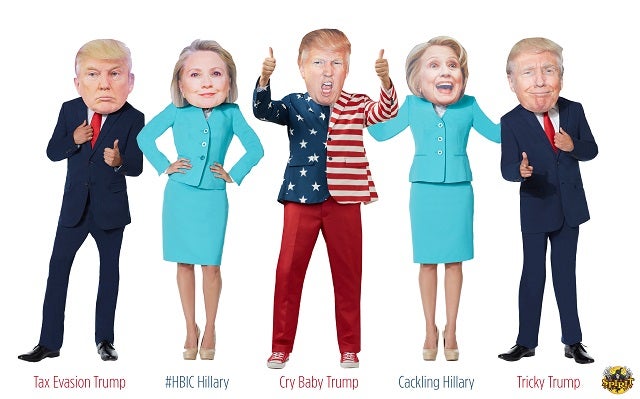 Which would seem to be an indicator of Trump’s greater popularity. However, as with seemingly everything involving the current presidential race, there is a twist — and it’s not a particularly positive one for The Donald. Of those who would dress as Trump, the top reason they provided was that they would do so to be funny, with 39 percent offering that reason. In contrast, the top reason that people offered for dressing as Clinton is that they like her, with 31 percent of respondents offering that reasoning.

Even so, feel free to grab onto this small glimmer of good news, Donald — you know, with your free hand.