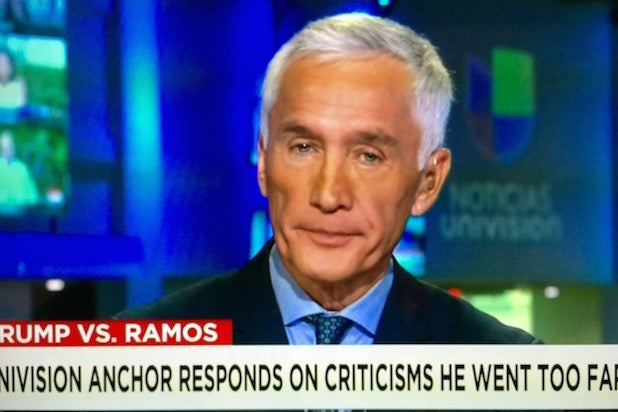 Jorge Ramos has warned “Judgement Day is coming” for those supporting Donald Trump in any form, including those not speaking out against the GOP presidential candidate.

“It doesn’t matter who you are — a journalist, a politician or a voter — we’ll all be judged by how we responded to Donald Trump,” the Univision and Fusion anchor wrote in a Time op-ed. “The day after the election will be too late.”

Ramos continued: “Regardless of whether Donald Trump wins or loses, we will be asked on November 9th: What did you do? Did you support him? Were you brave enough, ethical enough, to challenge him when he insulted immigrants, Muslims, women, war heroes and people with disabilities? Are you on the record correcting his lies? Did you discuss with your friends and family that in a democracy like ours there is no room for racism and discrimination? Or did you just seat idly, silently, allowing others to decide the future of the United States?”

He wrote that Trump “has forced journalists to revisit rules of objectivity and fairness” because, if “a candidate is making racist and sexist remarks, we cannot hide in the principle of neutrality. That’s a false equivalence.”

Ramos called for voters to “take a stand” against racism, discrimination, corruption, public lies, dictatorships and the violation of human rights.

The Univision star then mentioned “two crucial moments in which even Trump supporters couldn’t defend their own candidate,” pointing to comments about judge Gonzalo Curiel’s Mexican heritage and the comments made about the silence of a Muslim-American woman, Ghazala Khan.

Also Read: 17 Billionaires and Celebrities Who Could Run for President in 2020 (Photos)

“Trump, really, is no laughing matter. But he could be the next president. That’s how democracy works,” Ramos wrote to end the op-ed. “Judgment day is coming. Will you have peace of mind come November 9th?”

One year ago, Ramos was famously booted from a Trump campaign press conference in Dubuque, Iowa — before returning to engage in a heated exchange about illegal immigration with the GOP frontrunner.

The feud began in August 2015 when the popular anchor of the Spanish-language network attempted to ask Trump a question, to which the candidate responded, “You haven’t been called.” He then told Ramos, “Go back to Univision!”

Ramos was then escorted out of the room at Trump’s request by a security guard. Trump later told reporters Ramos was “out of order” but that he had no problem if Ramos wanted to return.

The journalist was soon seen back in the room and began a heated on-camera exchange with Trump over his proposal to expel undocumented immigrants and to deny U.S. citizenship to children born in the country to non-citizens.