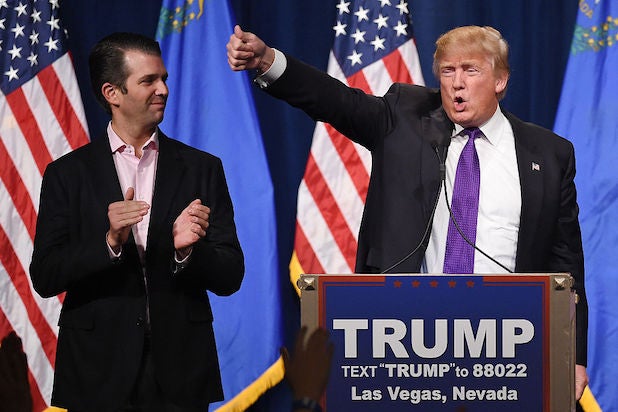 UPDATE 4:02 PT: In response to Donald Trump’s Jr. clarification, ADL spokesperson tells TheWrap: “Regardless of his meaning it is a phrase fraught with history and one that shouldn’t be invoked.”

UPDATE 2:29 PT: Donald Trump Jr. clarified his remarks about “warming up the gas chamber” telling NBC News that he was referring to capital punishment and not the gas chambers used by Nazis in World War II to murder Jews.

The Anti-Defamation League is demanding Donald Trump Jr. retract a joke he made about the Holocaust during an interview on Thursday, saying his comments were “out of line.”

“Donald Trump Jr.’s comment about the media ‘warming up the gas chambers’ for Republicans was completely out of line,” ADL CEO Jonathan Greenblatt said in a statement to TheWrap. “Trivialization of the Holocaust is never acceptable. We hope he will come to understand the sensitivities and the hurt his remark may have caused to Holocaust survivors and their families, and will retract his words and apologize to those he may have offended.”

The Trump campaign followed with its own statement on Thursday, attacking the media for misrepresenting his comments.

“The liberal, dishonest media is so quick to attack one of the Trumps that they never let the truth get in the way of a good smear,” Trump spokesman Jason Miller said. “Don Jr. was clearly referring to capital punishment to make the case that the media continues to take words out of context in order to serve as the propaganda arm of the Hillary Clinton campaign — something that’s only gotten worse as Trump’s poll numbers have improved.”

Donald Trump’s son, who’s been acting as a main surrogate for his father’s campaign, made a casual reference to the Holocaust on Thursday as he spoke about the media’s double standard in covering his father.

During an interview with Philadelphia’s Talk Radio 1210 WPHT,  Trump Jr. argued that Republicans would be punished if they pulled some of the same antics as Hillary Clinton’s campaign. Which was apparently a good segue into gas chambers.

“The media has been her number one surrogate in this. Without the media, this wouldn’t even be a contest, but the media has built her up,” Trump Jr said. “They’ve let her slide on every indiscrepancy [sic], on every lie, on every DNC game trying to get Bernie Sanders out of this thing. If Republicans were doing that, they’d be warming up the gas chamber right now.”

Do you "warm" gas chambers?

This isn’t the first time Trump Jr. has been slammed for anti-Semitic remarks.  Earlier this week, Trump Jr. posted an image to Instagram that included “Pepe the frog,” which, according to the Southern Poverty Law Center, is  “constantly used by white supremacists.”

Donald Trump himself has been accused of posting anti-Semitic memes and retweeting neo-Nazis and white supremacists. Earlier this week, Trump’s running mate, Mike Pence refused to call former Ku Klux Klan leader David Duke “deplorable.” (Pence later argued he didn’t want to use a Clinton reference to some of Trump’s supporters, whom she said fit into a “basket of deplorables”).