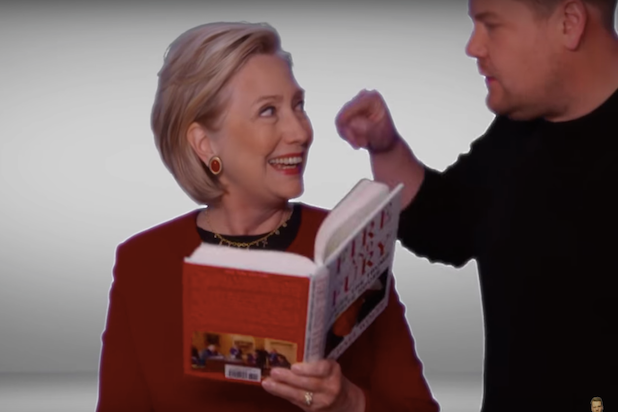 Donald Trump Jr. blasted his father’s 2016 presidential rival in a pair of tweets after the moment aired.

“Getting to read a #fakenews book excerpt at the Grammys seems like a great consolation prize for losing the presidency. #GrammyAwards,” Trump Jr. tweeted. “The more Hillary goes on television the more the American people realize how awesome it is to have @realDonaldTrump in office #GrammyAwards2018”

Getting to read a #fakenews book excerpt at the Grammys seems like a great consolation prize for losing the presidency. #GrammyAwards

Clinton’s cameo on Sunday surprised many and came at the end of a longer sketch about various stars auditioning as potential readers for the audio version of Wolff’s “Fire and Fury: Inside the Trump White House.”

The sketch also featured music stars like Snoop Dogg and John Legend to troll the president.

The moment was also slammed by United Nations Amabassador Nikki Haley, who said that she loved the music-industry event but hated how it had been politicized — especially the “Fire & Fury” sketch.

I have always loved the Grammys but to have artists read the Fire and Fury book killed it. Don’t ruin great music with trash. Some of us love music without the politics thrown in it.

During an appearance with Bill Maher earlier this month, Wolff publicly insinuated that Trump was having an affair with a woman featured in the book, which many believed to be Haley.

The rumors became pervasive enough that Haley was compelled to issue a public denial.