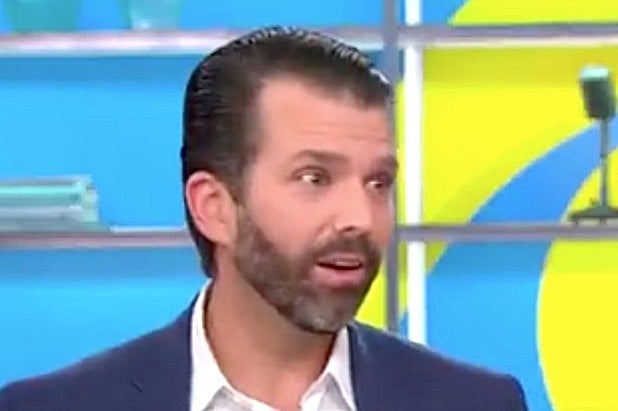 Donald Trump Jr. made a rare TV appearance Tuesday as a guest on “CBS This Morning” to promote his new book, dismiss the impeachment inquiry and diss Sen. Mitt Romney.

When asked by co-anchor Gayle King to name a favorite Democrat, the president’s son initially dodged the question. As the anchors closed out the segment, he jumped in: “Mitt Romney is my favorite Democrat. How about that?”

The joke is that Romney is actually a Republican. Get it?

When King pointed out that Fox News polling shows that about half of Americans want President Trump impeached and removed from office and asked what the White House’s response is, the younger Trump said, “Listen, I think you talk about reality.”

He then pivoted to Schiff, calling him “a known hater” who is acting as “judge, jury and executioner” in the impeachment inquiry.

Trump’s new book, “Triggered: How the Left Thrives on Hate and Wants to Silence Us,” was released on Tuesday.

He explained that after what he’s “been through for the last few years,” he feels entitled to use a book to “hit back a little bit.”