“Why would Kim Jong-un insult me by calling me ‘old,’ when I would NEVER call him ‘short and fat?’ Oh well, I try so hard to be his friend – and maybe someday that will happen!” the POTUS wrote.

People on Twitter called Trump everything from “a hot mess” to a “first-rate tool.” One accused him of going “back to the playground.”

Also Read: 'Morning Joe' Says Trump Is 'Excited' About War in North Korea: 'He Wants to Use Nukes' (Video)

“THE WORLD IS LOOKING AT YOU DOING THIS. STOP. AND THEN STOP BEING PRESIDENT!!!” Don Cheadle tweeted. “You had some fun, right? Got to sit in the chair. Even signed some stuff. Remember the pictures? That was cool, right? Now you have to go. Please. It’s only right.”

Here’s a handful of other Hollywood notables who had something to say about the president’s choice of words. 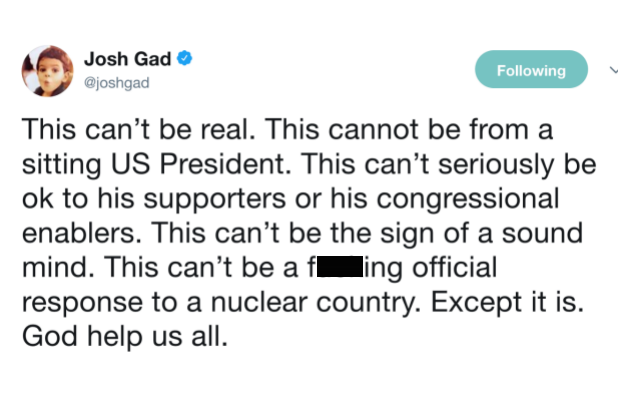 HOUSEWIVES PLAYBOOK: when you run out of intelligent arguments, head back to the playground https://t.co/MtF1RN7G8B

If this wasn’t written by that person who quit Facebook and killed his account for ten minutes then I am terrified of this dangerous infantile moron. Impeach now. Register to vote. @letamericavote @RockTheVote https://t.co/fsWbrtzo68

THE WORLD IS LOOKING AT YOU DOING THIS. STOP. AND THEN STOP BEING PRESIDENT!!! You had some fun, right? Got to sit in the chair. Even signed some stuff. Remember the pictures? That was cool, right? Now you have to go. Please. It’s only right. https://t.co/zSBK7wWeZI

The President of the United States Of American just released this statement wow.

You’re a hot mess. He should’ve said that. #accuracy

Is This What It’s Come To⁉️@CarrollBryant
I Do NOT Believe The Good People Of Alabama Agree With
You. pic.twitter.com/a9jq2OpoHJ

Someone’s having their morning poop in Vietnam: https://t.co/zCtdvnn4qE

I cannot believe this is a REAL tweet from the POTUS… https://t.co/SxS7z09hgD