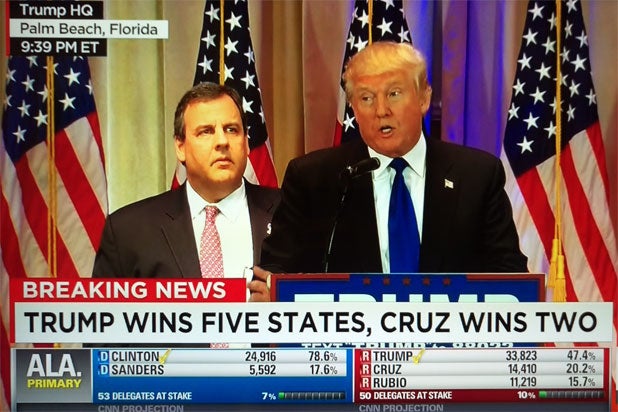 Donald Trump said it was a “tough night” for Marco Rubio on Tuesday, before turning his attention to Hillary Clinton.

“I always liked Marco [Rubio] until about a week ago when he decided to go hostile. He decided to go Don Rickles. But Don Rickles has a lot more talent,” Trump said. “Marco has not won. You’ve got to be able to win.”

He also said Clinton had committed “a criminal act” without going into detail.

While other candidates hold rallies and victory speeches, Trump celebrated his successful Super Tuesday with a White House-style news conference at his massive Mar-a-Lago estate in West Palm Beach, Florida.

The opening act was supporter New Jersey Governor Chris Christie, who named the states that Trump won on Super Tuesday before saying it’s “not a campaign” but a “movement.”

Trump said it was an “amazing honor” to have Christie on hand before opening up questions to the media. As MSNBC’s Brian Williams pointed out, Trump clearly wanted to look “presidential” during this event and used home field advantage to “look official in the role.”

The billionaire real estate mogul also that “Planned Parenthood has done good work for million of women” but is not going to fund abortions that occur there because he’snservative” and “truth teller.”

Rival Ted Cruz quickly used those words against him, saying Trump supported Planned Parenthood, in a bid to win over conservatives.

Trump also said he watched CNN, MSNBC and Fox News on his TV throughout the night — and joked that by watching all three networks he was “becoming diplomatic.” He even congratulated Ted Cruz for winning his home state of Texas.

“We are going to have a wall, I can tell you,” Trump replied, when asked if immigration is negotiable. “The Mexican leaders are too smart for our leaders.”

When questioned about if he could get along with House Speaker Paul Ryan, Trump said Ryan would pay a “big price” if they don’t.