Today is the 61st anniversary of the day Rosa Parks helped kickstart the civil rights movement by refusing to give up her seat on a bus in Montgomery, Alabama. It arrives as Donald Trump, a man many people have accused of unbridled bigotry, is about to take the White House.

Would you believe they met once?

If you’re not a Trump fan, you might assume that a picture of him and Parks floating around online today was doctored by supporters of the president-elect to make him look good by association.

But the photo is real — and both supporters and opponents of Trump have used the Parks anniversary to make political points.

Trump supporters cited the photo as proof that he isn’t racist, or to compare modern-day activists unfairly with Parks.

61 years ago today, Rosa Parks wouldn't give up her seat. Today we face white supremacy taking over the White House. Keep her fight alive.

The best part is Rosa Parks didn't resort to looting, rioting, and burning ???? to get what she wanted. https://t.co/lkuJ3GpW1R

The full, uncropped photo includes not just Trump and Parks, but also Muhammad Ali, Joe DiMaggio, Victor Borge, and Anita Bryant. (Parks died in 2005, and Ali in June.) All were receiving the Ellis Island Medal of Honor, which is given by the National Ethnic Coalition of Organizations.

Hillary Clinton received the award in 1999. 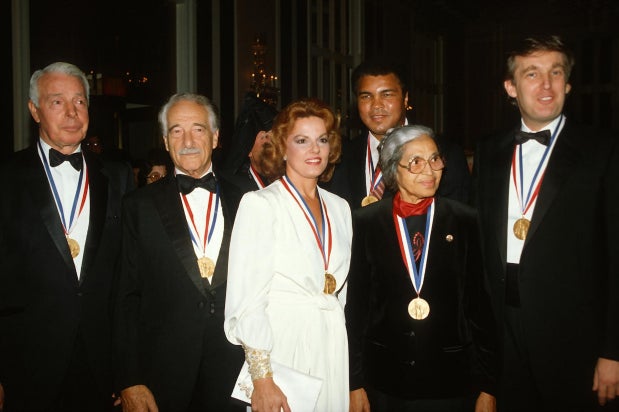 As Snopes explains, “The photograph is real. It was taken on 27 October 1986 by Getty photographer Yvonne Hemsey at a ceremony honoring the recipients of the Ellis Island Medal of Honor.”

The photo also emerged during the presidential campaign when the conservative outlet The American Mirror published in on Sept. 4 to assert, “No one accused Donald Trump of being a racist until he decided to run for president.”

The 1973 Justice Department that sued Trump and his father, accusing them of housing discrimination against black tenants, might disagree.

Trump, Parks and Ali were among 80 individuals to receive the Ellis Island Medal of Honor in 1986, the first year it was handed out, the site said.

NECO’s site says the awards “recognize individuals who have made it their mission to share with those less fortunate their wealth of knowledge, indomitable courage, boundless compassion, unique talents and selfless generosity; all while maintaining the traditions of their ethnic heritage as they uphold the ideals and spirit of America.”

Also Read: Trump Told to Divest His Businesses in Series of Snarky Tweets From Office of Government Ethics

Of course, being photographed with someone doesn’t make them guilty, or heroic, by association.