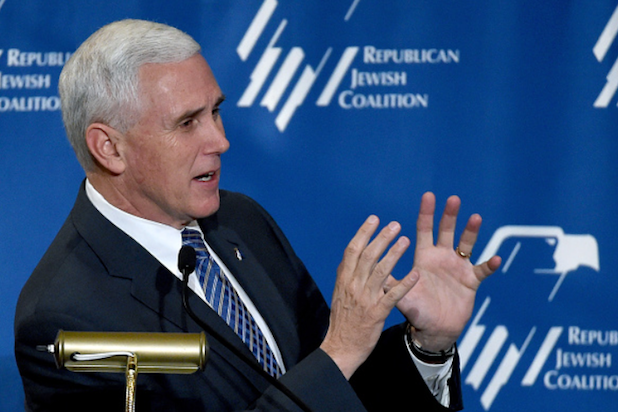 Mike Pence fired back at USA Today after the paper took sides in a presidential race for the first time ever when it asked voters to oppose Donald Trump.

“Between the candidates, the choice could not be more clear,” Pence wrote in a response to the paper’s non-endorsement of Trump. “By electing Donald Trump, the American people have the opportunity to choose a bold leader.”

“In a political world often reserved for talkers, Donald Trump is a doer,”Pence continued. “I’ve come to know the man who invited me to join him on the Republican ticket as thoughtful, compassionate and steady. Above all, I know he is ready to lead the United States as our next president and commander in chief.”

The paper’s editorial board listed eight reasons it is advising readers to vote for anyone else but Trump, including the fact that the GOP nominee is “erratic,” “traffics in prejudice,” has a “checkered” business career, speaks “recklessly,” and is a “serial liar.”

“This year, the choice isn’t between two capable major party nominees who happen to have significant ideological differences,” USA Today explained in its non-endorsement. “This year, one of the candidates — Republican nominee Donald Trump — is, by unanimous consensus of the Editorial Board, unfit for the presidency.”

Also Read: Who Is Gary Johnson? Jimmy Kimmel Has Trouble Finding Anyone Who Knows (Video)

“Reagan was regarded by the Washington political establishment as little more than a cowboy or a celebrity who entered politics late in life. He even made some Republicans uneasy. Along the way, people heard his vision of a renewed America. Americans from all walks of life flocked to a man who was so clearly unbound by Washington niceties and political correctness,” Pence wrote. “Reagan spoke the truth in 1980 to the American people, just as Donald Trump has in 2016.”