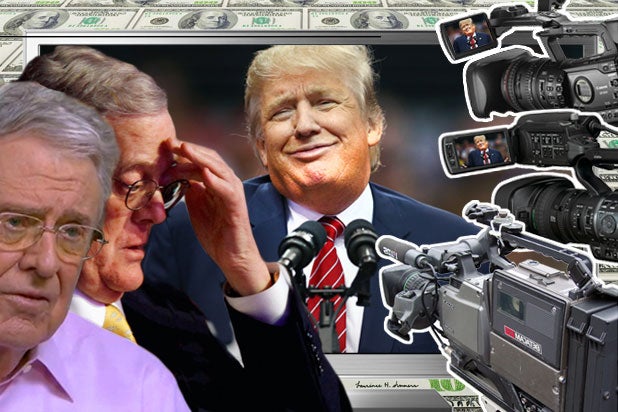 On Aug. 2, Donald Trump fired off one of his routine Twitter bombs, attacking his Republican presidential opponents for kneeling down to kiss the ring of the Koch brothers.

“I wish good luck to all of the Republican candidates that traveled to California to beg for money etc. from the Koch Brothers. Puppets?” the real estate mogul tweeted.

Trump, a rare Republican detractor of the Citizens United ruling that lifted campaign funding restrictions and emboldened the two-headed Koch machine to drop billions into candidates’ coffers, has relied on himself — and the media — to create a 24/7, walking TV attack ad that’s catapulted him to the top of most GOP presidential polls.

“The other candidates, and even Citizens United, have no real direct following,” Chad J. Kawalec, founder of the Brand Identity Center, told TheWrap. Contrast that with Trump, who can reach a massive audience through a social media post or daily TV appearance that costs nothing.

“[Trump’s opponents] must buy any voice they need, and that means they’re voicing their point of view in the old-fashioned vehicle of the past,” he continued.

But Kawalec predicted they will never be able to keep up with Trump because the boastful New York real estate tycoon doesn’t need money to earn votes — his “ratings are actually votes.”

And ratings he’s gotten, for months serving as the gift that keeps on giving for news networks and digital sites. Fox News and CNN’s GOP debates drew 24 million and 23 million viewers, respectively, with the networks billing the contests as quasi-boxing matches pitting the Donald against the world.

Also Read: Donald Trump Has Only Spent $1.9 Million of His Own Money on Presidential Bid

In those appearances, he’s created a groundswell of loyal support from fans who love when he attacks “puppets” like Jeb Bush. Trump has argued, to great effect, that Bush’s over $100 million fundraising haul would make him nothing more than a robot in the White House programmed by wealthy donors.

Bush, once considered the odds-on favorite for the Republican nomination, dumped $24 million in TV advertising in September on the crucial early states of Iowa, New Hampshire and South Carolina. But millions haven’t mattered as the youngest Bush languishes in single digits in national polls.

Then there was Wisconsin Gov. Scott Walker, once considered a young conservative spoiler to Bush with previous backing from the Koch Brothers. After two months in the race, Walker shocked the political world and dropped out after he was unable to grab media headlines and poll numbers from Trump.

Ironically, it has taken a billionaire who’s raised a paltry (by campaign standards) $1.9 million so far — $1.8 million of which came from his own pocket — to make clear that personality and bravado beats plutocrats and big bucks.

Linda Ong, CEO of cultural strategic messaging firm TruthCo, said influence, not money, is the new power, and Trump’s peddling plenty of it.

He’s become a “multiplatform influence machine,” she told TheWrap, leaving the Koch Brothers and the 157 other families providing nearly half of the presidential campaign funding this election cycle, on the outside holding their wallets.

Trump’s ascendance has shifted the paradigm, Ong argued, from donors’ golden boys and gals to “lone wolves” who “don’t play by the rules, game the system and are beholden to no one.”

Trump has “demonstrated the cultural preference to work outside of established systems and institutions — including the Citizens United ruling,” she added.

But can Americans of modest means pull off the same media magic act as a person of Trump’s … well, personage? Kawalec says yes, anyone with a strong following and a solid message that uniquely resonates can do the same.

“I have a feeling being a reality star may become a legitimate stepping stone to political office for more and more candidates.”