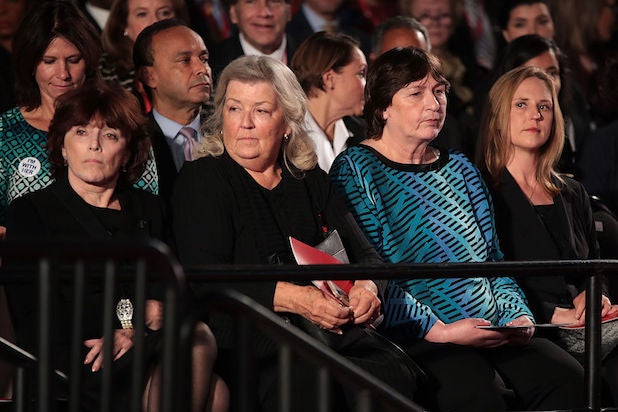 Donald Trump “sought to intimidate Hillary Clinton and embarrass her husband” by sitting women who have accused former president Bill Clinton of sexual abuse in the Trump family box, according to The Washington Post.

“The campaign’s plan, which was closely held and unknown to several of Trump’s top aides, was thwarted just minutes before it could be executed when officials with the Commission on Presidential Debates intervened. The commission officials warned that, if the Trump campaign tried to seat the accusers in the elevated family box, security officers would remove the women,” the Post reported.

The paper said that Trump campaign chief executive Stephen K. Bannon and Jared Kushner were behind the plan, which was personally approved by Trump and almost happened.

Giuliani told the paper, “[debate commission co-chairman] Frank Fahrenkopf stopped us and we weren’t going to have a fight on national TV with the commission to start the debate.”

Paula Jones, Juanita Broaddrick, Kathleen Willey and Kathy Shelton ended up sitting in other sections of the debate hall with ticketed members of the audience.

“I was surprised that they thwarted that, only because it did not say family box, it said VIP box.  And of course in the Clinton box, they had invited Sen. Claire McCaskill of Missouri. And she’s not a family member. But they threatened to have security remove the women. I thought that was unfortunate because Mark Cuban got to sit where he wanted to sit,” Trump’s campaign manager Kellyanne Conway said Monday on “CBS This Morning.”