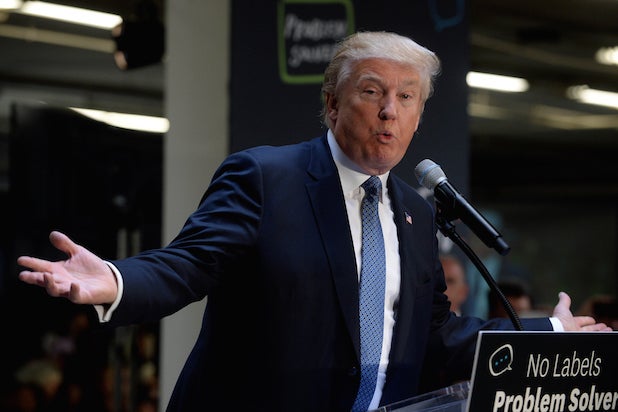 Donald Trump has maintained his No. 1 standing in GOP presidential polls, despite detractors’ best efforts to dethrone the reality TV mogul-turned politician. But could the newest alleged plots against Trump, which are so undermining they’re being coined the old political term “ratfreaked,” finally do some damage to the Donald?

The New York Post dove into a pattern of apparent press conference plants or “ratfreaks” that have targeted Trump. “Ratfreaking,” a term used by Donald Segretti during Richard Nixon’s Watergate scandal, is when a political party operative or “the rat” uses dirty tricks such as plants and double-agents to boost their own candidate’s chances by publicly embarrassing a direct competitor.

The most recent incident was last week at a New Hampshire campaign stop when a young woman told Trump, “I don’t think you’re a friend to [women],” then asking about pay inequality and women’s reproductive rights. The question complete with the young woman’s righteous indignation and hands-on-hips stance along with Trump’s answer almost instantly went viral across the Internet like blazing wildfire.

As it turns out, 18-year-old Lauren Batchelder is a college volunteer for the Jeb Bush campaign. Rut-roh.

“While this question was not sanctioned by the campaign,” said a Jeb spokesperson, “we can’t help but notice Mr. Trump does seem to be very sensitive about being challenged by women.”

The Post pointed to other Trump-stop incidents, including one where an apparent supporter called Barack Obama a Muslim, referring to the religious group as “a problem in this country.”

Wondering if that man was a plant as well, writer Michael Walsh said: “It’s clear that the Trump phenomenon is giving professional politicians a severe case of heartburn.”

“The GOP establishment … has been caught flat-footed by the rise of Trump and the other nonprofessional politicians and is desperately seeking a way to stop them,” he opined.

Walsh sees a major issue with bipartisan politics today, when he says “candidates swear fealty to whomever turns out to be the nominee, and pledge not to run as a third-party candidate.”

The author, who also penned “The Devil’s Pleasure Palace: the Cult of Critical Theory and the Subversion of the West,” pointed to how GOP’s presidential race has been turned on its ear with political “outsiders” breaking through over “traditional” candidates as he reviewed the field of Trump’s weak competition

“Jeb Bush combines the worst qualities of his father and brother without any of their strengths; he’s also already spent a fortune, with almost nothing to show for it,” Walsh said.

The piece also denounced Marco Rubio for his clear lack of experience not matching his ambition.

“Mike Huckabee and Rick Santorum are retreads,” Walsh wrote. “And sitting governors John Kasich, Chris Christie and Bobby Jindal have yet to set many hearts aflutter.”

“So the GOP is now facing its worst nightmare: What if Trump is for real?” he concluded. “That behind all the bluster, beneath the weird hair, is a guy who just might be able to clean out the Augean stables of the Permanent Bipartisan Fusion Party that continues to cling to power in Washington.”


Josh Duggar Gets Cozy With the GOP Elite (Photos)