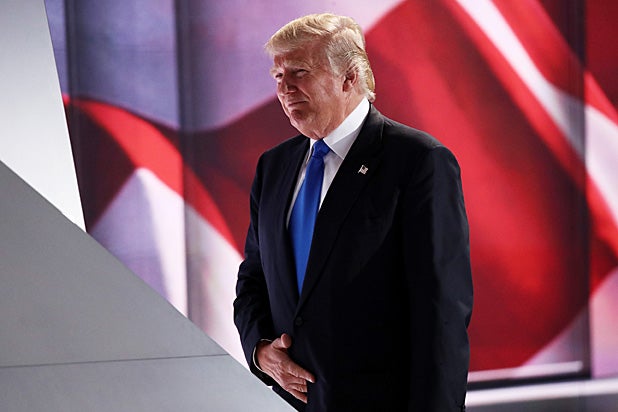 The Republican presidential nominee was introduced by his daughter, Ivanka, who described him as “colorblind” and “gender neutral.” But her generous words had some Twitter users confused.

The GOP candidate’s speech was nothing short of grim and angry, even at one time looking directly into the camera and saying, “I am your voice.”

Not everyone seemed to agree. Read some of Hollywood’s reactions below.

Trump's daughter just gave a great speech … Who the fuck was she talking about????

Dear Friends in the UK & Europe waking up and reading about Trump's apocalyptic #RNCinCLE speech: I'm sorry it's gotten this far.

I was going to pair my fear-anger w a nice prosecco but have opted for the hard stuff. #RNCinCLE pic.twitter.com/AUL2E1q9BL

Please stop TALKING AT US & NO YOU DONT LOVE US!!! #RNCinCLE @realDonaldTrump

My thoughts and prayers are with the good songs getting abused by the #RNCinCLE tonight.

They keep showing these long, lingering shots of people in the audience who look miserable. Good. They built this. #RNCinCLE

Damn, I ran to get my slippers; What date is safety is gonna be restored, specifically? #RNCinCLE

I think the true meaning of yelling is when you mute the television and you can still hear someone yelling! #RNCinCLE

Donald Trump is the dad that won't leave all the kids alone at the pool party.

If Trump kids are great, then we should give credit to the three mothers who apparently were the primary, day to day caretakers