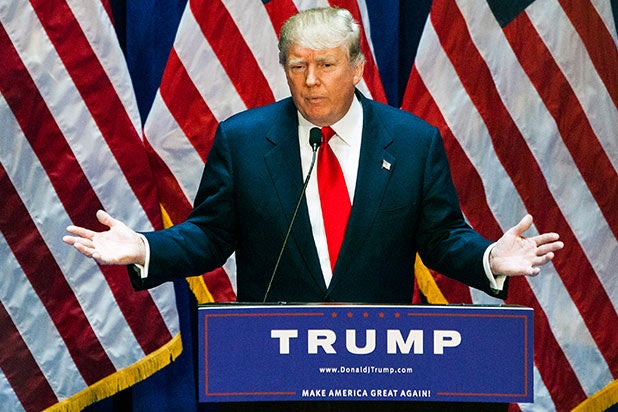 Donald Trump is not only ahead in the polls, but he’s also at the top of every late-night show host’s joke list.

Trump has been mocked by everyone from Conan to Bill Maher for his comments on immigration and same-sex marriage, as well as NBC’s decision to drop him from “Celebrity Apprentice.”

What’d they have to say? TheWrap found the best jokes from some of the funniest personalities on television so you don’t have to.

“Donald Trump has been running for president for just a little over a week, and he’s already in trouble. After Donald Trump’s derogatory comments about immigrants, NBC has officially canceled ‘Celebrity Apprentice.’ Think about it, Donald Trump isn’t even president yet, and he’s already made America a better place. Today, Donald Trump reaffirmed his stance against gay marriage. Trump said, ‘Marriage is between a rich guy and his much younger third wife.'”

“NBC says they will not carry Trump’s Miss USA or Miss Universe pageants because of what he said about Mexicans, and not — they want to make this very clear — not because these pageants treat women like cattle at a state fair. It was the thing about Mexicans.”

“Here’s what I’m telling you, I am for traditional marriage, but to be fair, the Trump business is harder than any wife could possible be. Wouldn’t you f–k one of my golf courses? I think you would.”

“Here’s the thing about Donald Trump: he never apologizes; he’s never wrong no matter what crazy thing he says. He’s the white Kanye.”