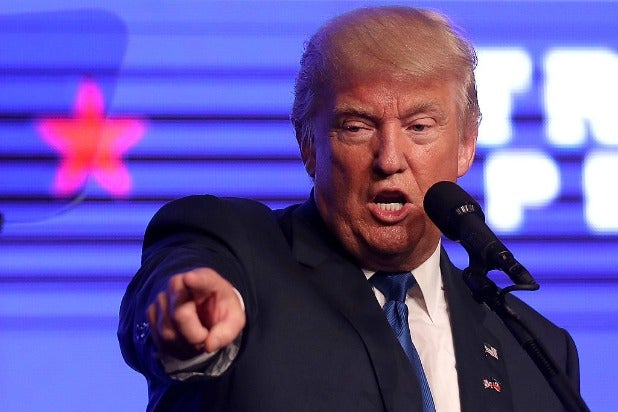 “Saturday Night Live” Weekend Update co-hosts Colin Jost and Michael Che defended Donald Trump when they had a chance to mock him, with Jost calling the GOP nominee “super smart” and saying, “He’s probably harder working than you.”

Politico’s Glenn Thrush interviewed the “SNL” stars for his “Off Message” podcast this week, just in time for the “SNL” season premiere on Saturday. While the comedians didn’t exactly endorse Trump, they seem to understand why he has succeeded in politics to this point.

“Should he be president? No,” Che said. “You know, like let’s not pretend that this guy is a mutant, you know, and he’s the most evil, racist, mutant piece of crap that ever walked. Listen, there’s probably somebody in your building way worse than Donald Trump, and you buy bagels from him, and it’s fine. You know what I mean?”

Anyone from NBC defending Trump is newsworthy these days, as the network has had a rocky relationship with Trump since he announced his candidacy in 2015. NBC was famously responsible for “The Apprentice,” which made Trump a household name. But Trump and NBC have feuded in the media, with the former “Apprentice” star accusing NBC News’ Lester Holt of asking unfair questions during the first presidential debate. NBC chairman Bob Greenblatt even ripped Trump as “pompous” and “toxic” in a Facebook post last month.

In between the drama, Trump has managed to stay cordial with “SNL” and “The Tonight Show starring Jimmy Fallon” despite constantly being a punchline on both programs. Trump hosted “SNL” last season and has appeared on Fallon’s show multiple times.

Jost and Che described their time working with Trump and Hillary Clinton, who also appeared on “SNL” last season, on the Politico podcast.

“It’s strange. They’re both super smart people and super hardworking people,” Jost said before Che chimed in, “And you can’t deny that. So like, that’s what bothers me, when people make it seem like, ‘You know what? I’m smarter than Donald Trump.’ Like no, you’re not, all right?”

Jost replied by joking with his “Weekend Update” partner, ” Yeah, you’re definitely not.”

“He surprised everyone because he hit these huge problems that no one on either side was talking about, like talking about, like, white middle-class America feeling alienated by trade deals that feel like they got screwed on or they lost jobs,” Jost said. “Lower-class workers that felt like they lost jobs in their town or their kids are going to lose jobs to immigrants.”

Earlier this week, “SNL” announced it booked Alec Baldwin as its Trump for Season 42 — or, at least, the first few months. The season premieres this Saturday, with Margot Robbie having the honors of kicking it all off.

Thrush’s “Off Message” with Jost and Che will hit Politico on Sunday night.