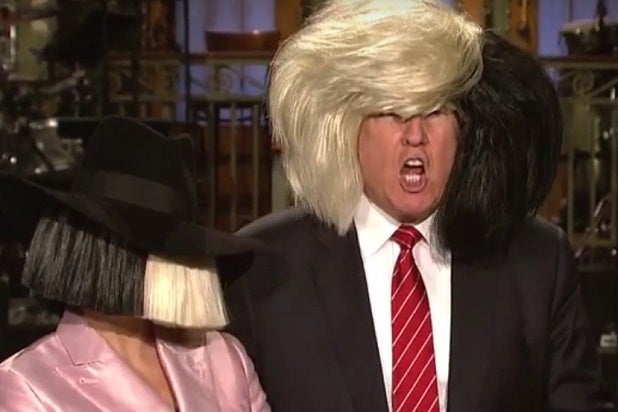 attends "The Hateful Eight" press room during Comic-Con International 2015 at the Hilton Bayfront on July 11, 2015 in San Diego, California.

Try not to flip your wig, Donald Trump.

The GOP presidential candidate, who hosts “Saturday Night Live” this week, sports slightly-more-ridiculous-than-usual hair in a new promo for the episode.

In the clip, Trump plops an outrageous blond-and-brunet wig on top of his melon. The hairpiece is meant to mimic the one worn by the episode’s musical guest, Sia — though he comes off as half-Cruella de Vil, half-Cousin It, and half demented Tribble. (Yes, we’re aware; that’s three halves, but the get-up is just that awesome.)

“Sia, I love this hair!” Trump says in the promo.

Watch Trump wig out in the video.