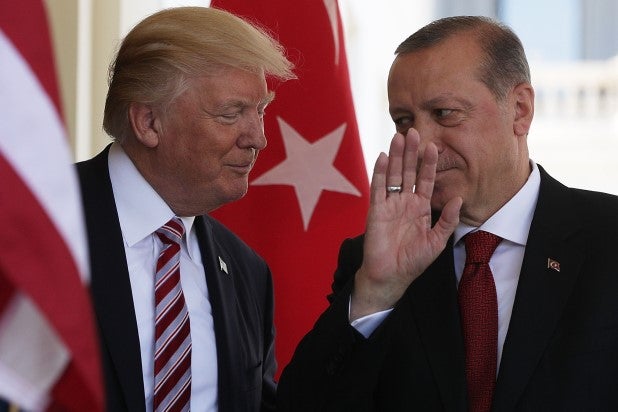 President Donald Trump sent a letter to Turkish President Recep Tayyip Erdogan last Wednesday, urging the Middle East leader to not be a “tough guy” or a “fool,” and to not “let the world down.”

The letter was sent three days after Trump ordered that U.S. troops be withdrawn from northern Syria, leaving America’s Kurdish allies vulnerable to an attack from Turkish forces. Trump’s letter appeared to urge Erdogan not to invade and attack the Kurds, who have been an ally to America in the fight against ISIS.

“Let’s work out a great deal! You don’t want to be responsible for slaughtering thousands of people, and I don’t want to be responsible for destroying the Turkish economy — and I will,” Trump’s letter read, according to a copy obtained by Fox Business’ Trish Regan. “I have worked hard to solve some of your problems. Don’t let the world down. You can make a great deal.”

The president then told Erdogan he would give him a call later.

EXCLUSIVE: I have obtained a copy of ⁦@realDonaldTrump⁩’s letter to #Erdogan. ⁦@POTUS⁩ warns him to not “be a tough guy! Don’t be a fool!” Says he could destroy Turkey’s economy if #Syria is not resolved in a humane way. Details tonight at 8pm #TrishRegan #FoxBusiness pic.twitter.com/9BoSGlbRyt

But on the same day Trump’s letter was dated, Turkey launched an attack in northern Syria and killed at least 23 Kurdish fighters, according to the New York Times.

The release of the letter also comes as House Speaker Nancy Pelosi told reporters on Wednesday that a meeting she and other congressional Democrats had with Trump on the situation in Syria had to end early due to the president’s “meltdown.”

“I think now we have to pray for his health because this was a very serious meltdown on the part of the president,” Pelosi said.

Senate Minority Leader Chuck Schumer also said that Trump was “insulting” to Pelosi and called her a “third-rate politician.”

“She kept her cool completely,” Schumer said. “But he called her a third-rate politician. He said that there are communists involved and you guys might like that. I mean, this was not a dialogue. It was sort of a diatribe, a nasty diatribe not focused on the facts, particularly the fact of how to curtail ISIS, a terrorist organization that aims to hurt the United States in our homeland.”

Later, Pelosi clarified that Trump had called her a “third-grade politician,” according to the Washington Post.

The White House press secretary told PBS NewsHour’s Yamiche Alcindor that Trump was “measured, factual, and decisive” during the meeting.

NEW: White House Press Secretary tells me: "The President was measured, factual and decisive, while Speaker Pelosi’s decision to walk out was baffling, but not surprising…While democratic leadership chose to storm out … everyone else in the meeting chose to stay in the room." pic.twitter.com/eoxZaZ6Nzz