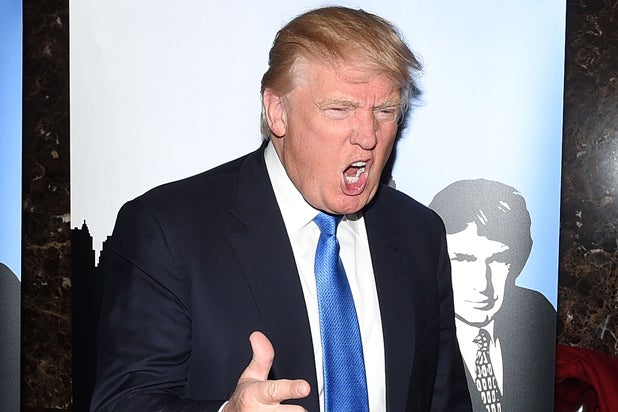 It’s official: Donald Trump has actually made good on his word on something.

Former “Celebrity Apprentice” host and current presidential candidate Trump, who had threatened to sue Univision for dropping the Miss USA pageant, has now filed that lawsuit, and he’s asking for a bundle — $500 million, to be exact.

In a recent speech, Trump characterized Mexicans as “rapists,” among other things.

NBC has also decided to sever ties with Trump,  citing his “derogatory” statement about immigrants. While “Celebrity Apprentice” will continue on NBC, it will do so without Trump.

The Miss Universe Organization, meanwhile, has said that the Miss USA pageant will continue as scheduled, without NBC.In the lawsuit, filed in New York Supreme Court on Tuesday, Trump hurls a host of accusations against Universal Networks & Studios and Univision executive Alberto Ciurana, including breach of contract, breach of the covenant of good faith and fair dealing and intentional interference with contractual relationship.

“While Univision has claimed in the media that its decision to cut tie with [the Miss Universe organization] came in response to certain comments by Mr. Trump during a June 16, 2015 campaign speech announcing his candidacy for President of the United States, the decision was, in reality, a thinly veiled attempt by Univision, a privately held company principally owned by longtime Clinton Foundation donor and current Hillary Clinton fundraiser, Haim Saban, to suppress Mr. Trump’s freedom of speech under the First Amendment as he  begins his campaign for the nation’s presidency,” the lawsuit reads.

“Simply stated, Univision has no right to terminate its relationship with [the organization] and refuse to broadcast the upcoming Miss USA pageant,” the complaint continues.  According to Trump, the agreement between Univision and the Miss Universe organization “does not give Univision the right to terminate simply because it does not agree with Mr. Trump’s longstanding views or statements, all of which are protected under the First Amendment and have been echoed by many in this county.”

Trump’s complaint claims that Univision agreed to pay a total of $13.5 million in licensing fees for the pageant over the next five years.

The suit claims that the damages, which will be determined at trial, are “believed to be in excess of $500 million.”

Univision responded to the suit with its own statement on Tuesday. “We just reviewed Mr. Trump’s complaint for the first time, and it is both factually false and legally ridiculous,” the network said. “We will not only vigorously defend the case, but will continue to fight against Mr. Trump’s ongoing efforts to run away from the derogatory comments he made on June 16th about Mexican immigrants.  Our decision to end our business relationship with Mr. Trump was influenced solely by our responsibility to speak up for the community we serve.”