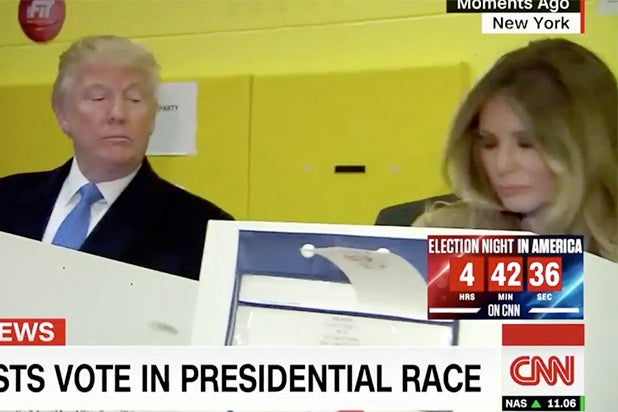 Donald Trump appeared to sneak a peek at his wife Melania’s ballot when the couple voted side by side Tuesday morning.

The moment, captured by CNN cameras, immediately caught the attention of Twitter, which promptly turned it into the first big meme of Election Day.

The Republican presidential nominee, Melania and daughter Ivanka voted at a public school in Midtown Manhattan. Arriving at their polling place to a chorus of cheers and boos, the family was also besieged by a pair of topless protesters who repeatedly chanted, “Out of our polls, Trump” before being hauled off by authorities.

Check out the memes below.

when you didn't open your textbook once the entire semester but you know this test is the only thing that counts toward your final grade pic.twitter.com/LrSzepa5Fu

trump: what are you drawing
melania: uhh… nothing pic.twitter.com/2EMzgUx8yc

When you suspect bae might not actually vote for you on #ElectionDay pic.twitter.com/r6q4TvOII6