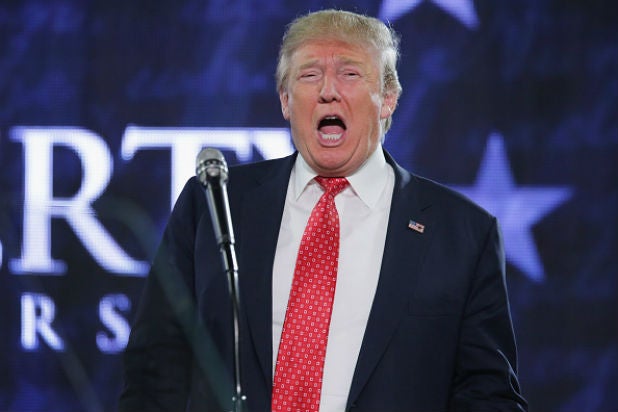 Donald Trump may be looking to get litigious with the Washington Post after the newspaper published an article detailing the bankruptcy of the billionaire presidential candidate’s Atlantic City casino.

When asked to discuss the details of the Taj Mahal’s failure in the early ’90s, Trump said, “This was not personal. This was a corporate deal. If you write this one, I’m suing you.”

The Washington Post article lays out how Trump ended up using junk bonds to raise the money necessary to buy the casino in the late 1980’s, despite criticizing such bonds during regulatory hearings.

“I’m talking about banking institutions, not these junk bonds, which are ridiculous,” Trump testified in 1988. “The funny thing with junk bonds is that junk bonds [are] what really made the companies junk.”

The Trump Taj Mahal opened its doors in April 1990, but went bankrupt in July 1991 after failing to pay back interest payments to bondholders. However, Trump told the Post he would make the same move again in the same circumstances.

“I didn’t want to have any personal liability, so I used junk bonds,” he said. “I accept the blame for that, but I would do it again.”

Also Read: GOP Debate: Donald Trump and Ted Cruz Could Be Running Mates, If They Ever Stop Fighting

The article goes on to point out that Trump, despite distancing himself from his failed casino, was intimately involved from day one. He owned a 100 percent stake in the Taj Mahal, but was forced to sell off half of his share when things began to falter.