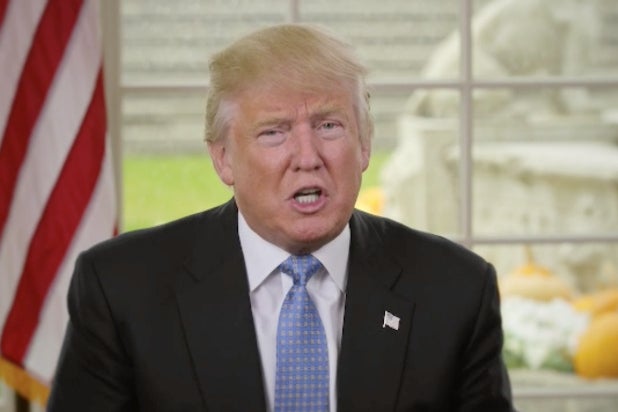 Donald Trump has been named Time magazine’s Person of the Year.

The magazine shared the cover showcasing the president-elect on social media Wednesday morning.

Everything you need to know about TIME's Person of the Year https://t.co/Zs0m5qWq2v pic.twitter.com/xNAamcnD6P

The cover photograph was shot in Trump’s Manhattan apartment, in his favorite chair. He called into NBC’s “Today” show to discuss the honor with Matt Lauer on Wednesday morning.

“It’s a great honor. It means a lot, especially me growing up reading Time magazine, it’s a very important magazine and I’ve been lucky enough to be on the cover many times… I consider this a very, very great honor,” Trump said.

Time editor-in-chief Nancy Gibbs appeared on MSNBC’s “Morning Joe” to discuss the decision to name Trump the person who had the most impact on the world “for better or for worse.”

“I challenge all of you to tell me who other than Donald Trump had more influence on the events of this year,” Gibbs said before explaining that Trump personally complained to her about not winning the honor last year.

The magazine’s cover calls Trump the “president of the divided states of America.”

“There is uniform agreement that [in 2016] he had the most influence on the news and profound disagreement over whether it was for better or for worse,” Gibbs said. “I don’t think we’ve ever seen a presidential candidate who did it so on his own… it’s just unprecedented.”

Hillary Clinton finished as the runner up, while “the hackers” finished third.

Click here to read all about Time’s selection process. Ultimately, the magazine selects the person or people who “wielded the most influence in the previous 12 months,” it explained.