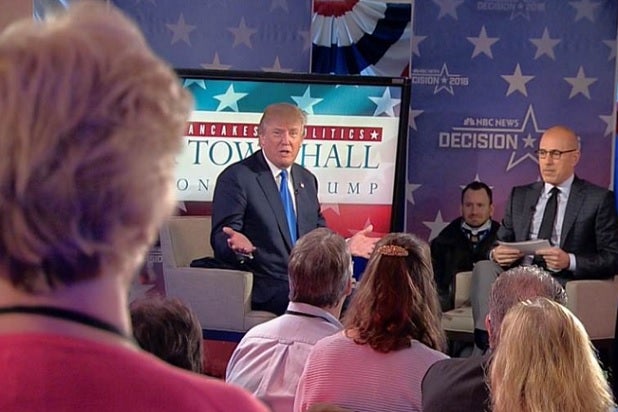 Viewers of Monday’s episode of “Today” had plenty to say about the appearance of GOP presidential candidate Donald Trump.

Trump was on the morning show for a live town hall meeting and Q&A with host Matt Lauer. Many began using the hashtag #TrumpTODAY to vent their frustrations with the outspoken candidate.

The Republican frontrunner’s biggest gaffe came when he said his father gave him a “small loan of a million dollars” when he first broke into real estate.

See video: Donald Trump Admits He's Got Weaknesses at 'Today' Show Town Hall, But 'Doesn't Wanna Give It Up'

When ratings become a measure for the next leader of the free world… we need to rethink our representative government. #TrumpTODAY

“It has not been easy for me. My father gave me a Rolls-Royce, but it was Alpine grey not Athenian Blue.” #TrumpTODAY – Jeremy Newberger (@jeremynewberger) October 26, 2015

Trump: My father gave me a small loan of a million dollars. Oh, how he struggled. It brings a tear to my eye.

Trump will wait to re-negotiate trade agreements once elected, as his clothing line is now being made in China. #TrumpTODAY – Jaguarjin (@jaguarjin) October 26, 2015

If trump wins, we might as well just light the whole country on fire bc it will be a living hell #TrumpTODAY

Wow, Trump really doesn’t have much to say. Defensive with no how or plan, except to build a wall. #trumptoday

RT @TODAYshow: “My father gave me a small loan of a million dollars.” -@RealDonaldTrump #TrumpTODAY pic.twitter.com/3NPRl6RXYF

I lost a serious amount of brain cells listening to #TrumpToday not answer questions. He is completely delusional, as are his supporters. — Tree (@MatchboxGinny) October 26, 2015

I am so afraid for everyone who thinks this man is right for this country. #TrumpTODAY