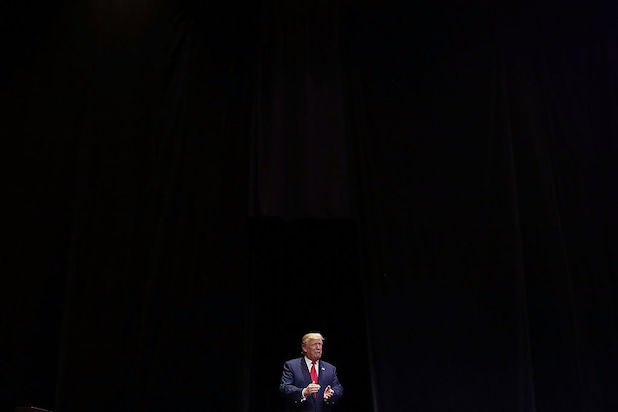 If you took an innocent-seeming Facebook quiz in the weeks before the presidential election, you may have taken part in Donald Trump’s plot to win the presidency.

The notion that Facebook quizzes about subjects like Harry Potter could be used to secretly gather data on voters may sound like something out of sci-fi. But experts say Trump may have used them to identify Hillary Clinton voters and discourage them from showing up at the polls — totally unbeknownst to the people who took the quizzes.

“They’re using the latest commercial targeting techniques,” investigative reporter and filmmaker Greg Palast, who has focused on voter suppression, told TheWrap. “They have over a thousand data points on you, which means they have a complete profile. They really know what bugs you.”

Concerns over Facebook quizzes are not new — a Democratic consultant told TheWrap that President Obama’s campaign used them in his successful 2012 re-election bid. Facebook’s privacy settings let applications access information on your profile even if you’ve tried to limit that information to a small circle of friends, according to the American Civil Liberties Union.

But Trump’s team seems to have used the quizzes more aggressively than any campaign before.

While pundits and politicos mocked Trump in the final days of his campaign for what seemed like a lack of basic campaign organization, his team was quietly mining Facebook, investing $100 million in personality quizzes and “dark posts” — which are essentially ads that can only be seen by the recipients — to raise more than $250 million in campaign donations and suppress vulnerable Clinton voters, according to Wired.

Neither Cambridge nor Parscale responded to TheWrap’s request for an interview. But just days before the election, Parscale and his team gave exclusive access to Bloomberg Businessweek, where they discussed the operation in detail. Once Parscale came up with the right messaging for targeted ads, his firm hired several companies to help identify the most effective social media ads, testing variations which generated 100,000 different pieces of content. The digital team then rolled out only the strongest performers.

“They managed in the last couple of weeks [before the election] to use it in a way that I don’t think we’ve ever seen in terms of negative political advertising,” consumer protection litigator and former New Jersey deputy attorney general Joel Winston told TheWrap. “I don’t think that any political campaign has ever had the ability to target these ads that this campaign did.”

According to Bloomberg, Trump’s strategy was not to expand his voter base but rather to shrink Clinton’s. The campaign focused hard on its custom database in the weeks leading up to the general election, hiring more than 100 people to run it. Its aim was to identify pockets of vulnerable Clinton voters and get them to stay home.

Bloomberg said Trump’s team began placing the ads on “select African-American radio stations” in late October. They were then targeted with dark posts that used “South Park”-style animation and cited a comment Clinton had made about “super predators” in 1996: “Hillary Thinks African Americans are Super Predators.”

“The Trump campaign mounted an impressive effort, far more sophisticated than most news accounts had suggested before the election,” Jack Pitney, professor of government at California’s Claremont McKenna College, told TheWrap. “Anything that shifts a fraction of a point in a tight election is very important, so we cannot discount the significance of the digital campaign.”

But Pitney warns against giving the tech wizards too much credit.

“Cambridge Analytica worked for [Ted] Cruz in the primaries, and he lost,” Pitney said. “These campaign techniques can help a candidate take full advantage of favorable conditions, but they cannot overcome a bad political environment. The GOP made great use of microtargeting in 2004, but it could not stave off a thumpin’ in the 2006 midterm.”

“Lots of people do that and have done it for quite a while,” he told TheWrap.

De Vellis said he isn’t sure whether to believe anything the Trump campaign says about its techniques, since the president-elect’s employees have a vested interest in making him look smart.

“I don’t know how you spend $100 million on digital ads — that’s a lot of money. Maybe they took it to a different level,” he said. “But this doesn’t sound new to me.”

Facebook declined TheWrap’s request for comment. But CEO Mark Zuckerberg has been working hard trying to downplay criticism surrounding Facebook’s fake news problem. During a post-election conference, Zuckerberg insisted: “The idea that fake news on Facebook influenced the election in any way is a pretty crazy idea.” But he did not discuss the criticism surrounding the quizzes.

Also Read: Did Donald Trump Just Use the Debate to Test-Launch Trump TV?

But others say Trump could be ushering in a new era.

“There were more staffers in Trump’s digital operation than his entire campaign,” Winston said. “The volume of data he was pulling was unprecedented. That was the difference that pushed him over the finish line.”