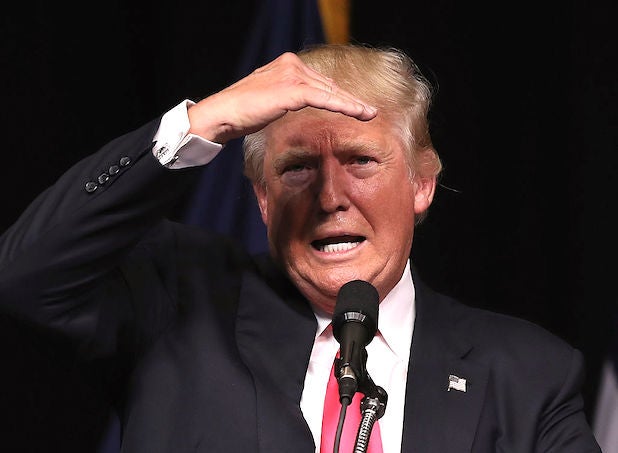 In the 13 months since he descended an escalator to announce his bid for The White House, Donald Trump has managed to offend Mexicans, Muslims, Jews, veterans, African-Americans, women and the disabled.

To the surprise of pundits and political strategists, his poll numbers continued to rise.

But just 100 days before the general election, the GOP nominee may have finally crossed a line in a way he can’t walk back: He went after the Gold Star parents of an army captain who sacrificed his life to save his fellow soldiers.

Also Read: Ghazala Khan Fires Back at Donald Trump: 'My Culture Never Stopped Me Saying Whatever I Want to Say'

Here are five reasons why Trump’s fight with Khizr and Ghazala Khan could be the one that blows up in his face:

1. The Khan attack feeds right into the worst perceptions of Trump
Political attacks don’t tend to work unless they somehow feed into an existing perception about a candidate, and this one does.

Democrats have accused Trump of being xenophobic, thin-skinned, and intemperate. With the Khans, they found people who could make him appear to be all three.

If naked photos of Trump’s wife couldn’t distract people from the Khan fight, what will?

Also Read: Melania Trump Bares All on the Cover of NY Post

2. Dems trolled him so easily
It’s no coincidence that Dems scheduled Khizr and Ghazala Khan on Thursday night, right before Hillary Clinton’s big speech. They thought the couple would get a rise out of Trump, and they were right. It didn’t take long before the media focused on the speech, which ended up getting more attention than any other during the week-long convention.

But its safe to say that no one imagined he’d take the bait so easily — even Clinton, who said of Trump: “A man you can bait with a tweet is not a man we can trust with nuclear weapons.”

3. It raises questions about Trump’s judgment
If you’ve ever watched a single episode of “Law & Order” you know that lawyers never ask a question they don’t know the answer to. Chris Darden, former prosecutor on the O.J. Simpson criminal case, learned that lesson the hard way after asking Simpson to try on that glove.

Trump made a rookie mistake when he went after Ghazala Khan, who stood beside her husband during his speech but did not speak. Trump suggested she wasn’t allowed to speak because of her religion.

But Ghazala Khan quickly shot back, saying that she was unable to speak because was too upset over her son’s death.

4. It could threaten an important voting bloc
This isn’t the first Trump has gotten himself into a bit of pickle with military veterans. In July 2015, Trump shocked many when he belittled John McCain’s war record. In May, Trump came under fire for appearing to fail to deliver on his promise to donate $1 million to veterans. With  21.8 million U.S. veterans living in the U.S., according to the Census Bureau, Trump may be in danger of losing one of the most important and politically active voting blocs — a voting bloc that leans right.

5. It couldn’t have come at a worse time
Trump’s other fights happened mostly during a contentious, crowded primary season when candidates were struggling to get airtime. But Trump has spent the four days since the official start of the general election licking his wounds, even as Clinton is enjoying her post-convention bump.