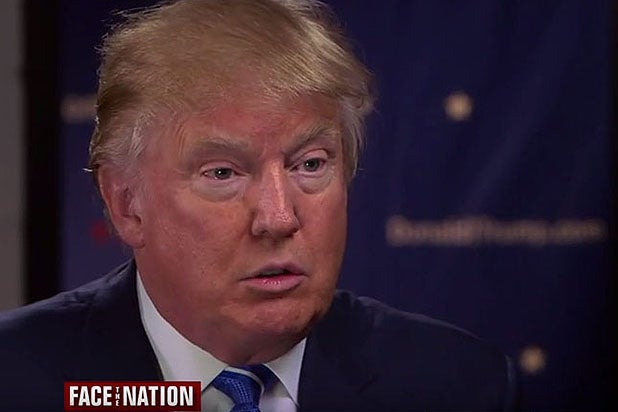 Donald Trump is vowing to clamp down on suspected terrorists if elected president, by going after their families.

“I would certainly go after the wives who absolutely knew it was happening,” Trump said Sunday on CBS’ “Face the Nation” as he compared Wednesday’s mass shooting in San Bernardino, California, to the attacks on Sept. 11, 2001.

“I would be very tough on families. Because the families know what’s happening. Even in this last instance, I see everybody knew,” Trump told moderator John Dickerson.

Syed Farook, 28, and Tashfeen Malik, 27, killed 14 people and injured 21 others after going on a shooting rampage at a holiday party inside the Inland Regional Center last week, according to authorities. Hours later, the husband and wife were killed in a shootout with police. Authorities later discovered an arsenal of ammunition and pipe bombs at Farook and Malik’s Redlands home, where they cared for their six-month-old daughter.

Trump had harsh words for the couple’s neighbors, who have been quoted in local media reports, as saying they thought something was amiss at Farook and Malik’s rented townhouse, but did not go to police out of fear of being accused of racial profiling.

“So many people knew. They thought that this man and this woman, you know, whether he was radicalized or how he became — they thought something was going on,” he said. “Why don’t these people report it to the police?  Why wouldn’t they report it to the police?  Now they said it was profiling. They didn’t want to profile.  Can you believe this?  They didn’t want to profile, even though they thought something very bad was going on.”

Asked later if he thought singling out the families of suspected terrorists would create animosity, Trump said he was more concerned about saving lives.

“We have to stop terrorism,” he said. “Whether it’s what we just saw in California or in Paris.  They’re killing people, innocent people. People without guns. You look at Paris.  No guns. Nothing. And you look at California.  No guns. I can tell you one thing.  If I’m in there and I have a gun, I’m — we’re going down shooting.”

Watch the video of Donald Trump’s interview on “Face  the Nation” below.