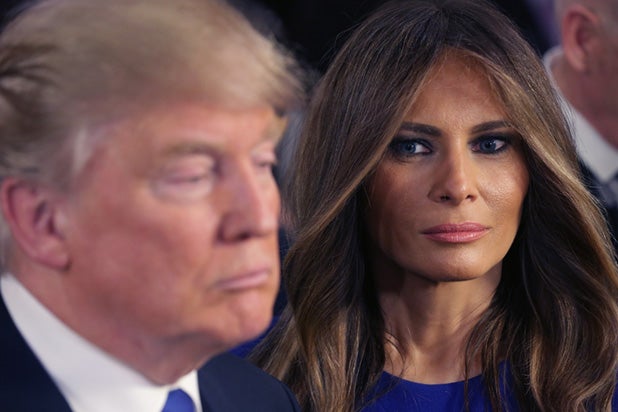 The writer of a GQ profile on Donald Trump’s wife Melania has become the target of anti-Semitic threats — many of them violent — by supporters of the GOP presidential frontrunner.

“They said I’d make a good lampshade,” Julia Ioffe, who happens to be Jewish, told PRI’s “The World” on Friday.

According to Ioffe, it all started after a white supremacist website, The Stormer, wrote an article titled “Empress Melania Attacked by Filthy Russian Kike Julia Ioffe in GQ!“

“They basically asked everyone to send me a tweet, saying how it made them feel,” Ioffe said.

Ioffe, who interviewed Melania Trump for the story, traveled to her native Slovenia to interview people who knew her growing up. The profile painted a picture of an intelligent, responsible, hard-working woman who is devoted to her family.

But that didn’t seem to matter to Trump supporters, who began firing off  “some pretty vile images in my email and Twitter feed. You know, caricatures of Jews being shot, execution-style; a ‘Back to The Future’ poster re-done as ‘Back To The Oven,'” Ioffe said.

It didn’t help matters that Melania Trump criticized Ioffe for invading her family’s privacy in a Facebook post on Wednesday, accusing Ioffe of several unspecified inaccuracies, telling her followers that, “Ioffe, a journalist who is looking to make a name for herself, clearly had an agenda when going after my family.”

According to Ioffe, what scared her the most were phone calls in the middle of the night “regarding inquires I had supposedly left about caskets and homicide clean-ups at my house.” Other calls incorporated automated recordings of Hitler’s speeches.

Despite all that, Ioffe said she’s not worried about the death threats.

“I’ve gotten blowback for my pieces online in the past,” she said. “You know, as a journalist, this is what comes with the territory. This is just going after my religion and ethnicity.”

Ironically, Ioffe’s family moved to the U.S. from the Soviet Union in 1990 to escape anti-Semitism.

“I don’t think and I don’t know that Melania Trump sent these anti-Semitic trolls to my virtual doorstep,” Ioffe told PRI, “but she did express displeasure with my article. She named me. And this is what happened. This has happened to journalists before me, and I’m sure it will happen again.”

From my inbox. Subject line: "They know about you!" pic.twitter.com/zp3v2GjTeI

.@GideonResnick @OKnox Oh, I thought this one reminding me to swallow my diamonds was from you! pic.twitter.com/Ri6tZsyHXx