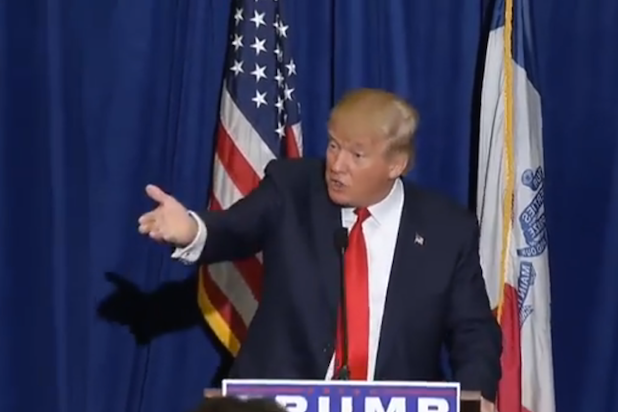 Donald Trump held what seems to be his most shocking campaign events yet. The gatherings took place Tuesday in Dubuque, Iowa, where the GOP frontrunner kicked things off with a contentious press conference followed by an over-the-top campaign rally.

The controversy began when Univision anchor Jorge Ramos was booted from Trump’s press conference after standing up and yelling out a question without being called upon. “You haven’t been called,” Trump chided Ramos. During the testy exchange, the real estate mogul told the popular Spanish-language network anchor, “Go back to Univision!” Ramos continued to fire off questions, but Trump told him, “Sit down. Sit down.”

That was just the tip of the Trump iceberg.

Here are some of Trump’s most outrageous moments from his Tuesday campaign events.

1. After Ramos was allowed to return to the press conference, he began to debate Trump on illegal immigration. “Here’s the problem with your immigration plan. It’s full of empty promises,” Ramos said about the Republican’s plan to deport undocumented immigrants and the recent controversy around the term “anchor babies.” Trump then mentioned his $500 million lawsuit against Univision, and told Ramos, “I have a bigger heart than you do,” referring to his plan to increase border security.

2. Trump also ripped Fox News, claiming the network “treats him terribly” and insisted that Megyn Kelly is the one that owes him an apology. “I don’t care about Megyn Kelly… when people treat me unfairly, I don’t let them forget,” Trump said in reference to the first GOP presidential debate on Fox News. “I certainly had the worst questions, the most unfair questions.”

3. Following the presser, Trump talked to a crowd of supporters at the Grand River Center in Dubuque, telling them TV networks and journalists are “not nice people,” adding, “If I didn’t get ratings they wouldn’t be here… the only thing they care about is ratings.”

5. Trump had some choice words for President Barack Obama’s handling of the Iraq exit. “We shouldn’t have gone in, and the way Obama got out is a total catastrophe,” he said.

6. It really wouldn’t be a Trump speech without a few self-congratulatory comments from the real estate mogul. “It takes courage to run,” Trump reminded his supporters. “You’re really exposing yourself like crazy.”

7. The business mogul continued his attack on China telling the crowd that the Chinese have “taken everything. It’s one of the greatest thefts in the history of the world,” but not before adding this little gem: “I love them, they buy my apartments.”

8. About rival presidential candidate Jeb Bush, Trump had this to say: “I think Jeb is a nice person. He’s very low energy. I’m not used to that kind of a person,” adding, “I’m used to dealing with killers [rival business exeuctives].”

9. The tell-it-like-it-is candidate has been boasting about his ability to talk without prepared notes, suggesting, “we should outlaw the teleprompter for anybody running for president.”