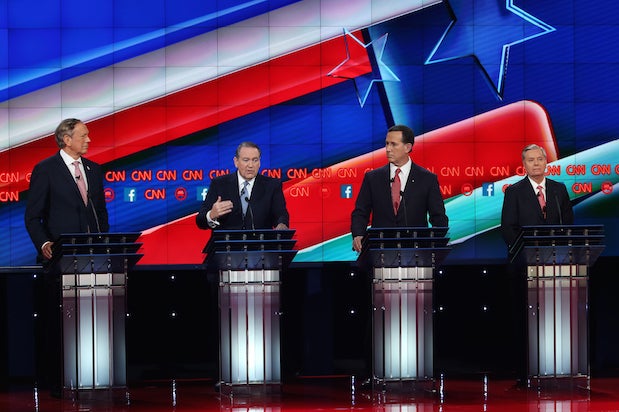 ISIS and the war on terror took center stage at the GOP undercard debate Tuesday in Las Vegas.

The Republican presidential candidates gathered at the Venetian Hotel for the first time since the terror attacks that shook Paris and San Bernardino, California.

Here are the seven takeways from the GOP undercard debate

1. Radical Islam and Donald Trump
It took less than two minutes from the start of the debate for the words “radical Islam” to come up. That honor went to Gov. Pataki who also brought up frontrunner Donald Trump right out of the gate, saying the GOP frontrunner is “not fit to be president.”

3. Candidates weigh in on Trump’s proposed ban on Muslims
Even though Trump was nowhere near the stage, his presence was felt throughout the debate. Candidates were asked what they thought of the real estate developer’s proposed plan to ban Muslims from entering the county. Santorum came out as a partial supporter of Trump’s proposal – a move that won him some applause from the crowd. But Huckabee, Pataki and Graham all opposed it.

Graham apologized to the Muslim world for Trump’s proposal. Pataki echoed a similar disapproval of the plan. “Donald Trump is the know-nothing candidate of the 21st century and cannot be our nominee,” he said. But Santorum countered that while “not all Muslims are jihadists… all jihadists are Muslims.”

All four candidates said the San Bernadino terror attack has clarified the need for better monitoring and data collection.

Huckabee called for better social media monitoring of immigrants while Pataki called for limited monitoring of mosques and social media. Santorum urged for broader collection of phone data and Graham agreed. “We’re at war folks,” he said. “They’re not trying to steal your car. They’re trying to kill us all.”

“I blame Obama for ISIL, not Bush,” he said. “I miss George W. Bush. I wish he was president right now. We wouldn’t be in this mess.”

The rant got a thunderous applause from the audience.

6. Women in combat
After Santorum expressed doubt about women in combat roles, Graham scored huge points with the crowd with yet another one of his famous zingers.

“To women, if you want to kill terrorists, I’m your guy.”

7. Attacking Ted Cruz
Texas Sen. Ted Cruz was the target of attacks during the undercard debate in yet another sign that he’s gaining momentum.

Graham hit the Texas senator for saying that he may be open to leaving Syrian President Bashar Assad in place as he poked fun at Cruz’s taste in movies.

“He says his favorite movie is ‘The Princess Bride,'” Graham said. “Getting in bed with Iran and Russia to save Assad is inconceivable!”

Watch the video of Santorum speaking about jihadists below.