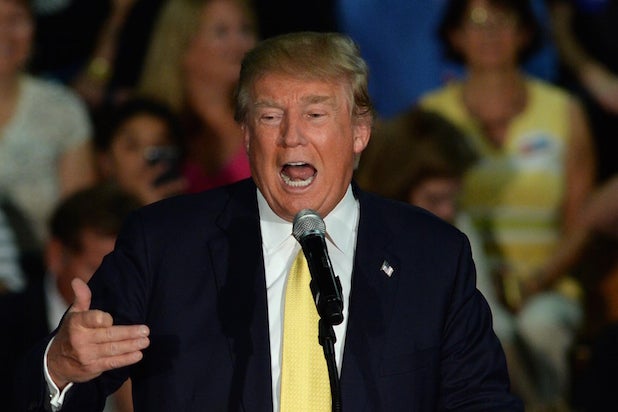 Donald Trump’s statement on Thursday that he would “absolutely” institute a mandatory Muslim registry has sent a shudder down the spine of the Hollywood Muslim community, worried that the GOP frontrunner’s rhetoric is getting out of hand.

“My heart breaks,” veteran screenwriter Kamran Pasha told TheWrap. “The American people are better than this.”

Trump’s statements — as well as those of GOP rival Ben Carson, who on Thursday compared the risk of allowing Syrian refugees into the U.S. to having “a rabid dog running around your neighborhood” — drew harsh criticism from both Muslim and Jewish  members of the Hollywood industry.

“This is utterly offensive and so antithetic to the founding principles of America, it would be almost funny if it weren’t so disturbing,” Democratic political consultant Donna Bojarsky,  who is Jewish, told TheWrap. “Civil liberty is something that’s important to the Hollywood creative community and the Muslim community, so there’s definitely acause to be made here.”

Also Read: Donald Trump Wants to Push for Muslim Surveillance in US: 'Security Is Going to Rule'

In an interview with Yahoo News, Trump said that he would consider requiring Muslim-Americans to register with the government and giving them special identification identifying their faith.

On Friday, the GOP frontrunner tried to walk back his remarks, which had been recorded on camera. “I didn’t suggest a database — a reporter did,” Trump tweeted. “We must defeat Islamic terrorism & have surveillance, including a watch list, to protect America.”

But many felt Trump’s suggestions resemble Nazi laws imposed on Jews during World War II, including requiring them to wear a gold Star of David on their clothes.

“The rhetoric is getting to a kind of place where we’re talking about the equivalent of putting yellow stars on Muslims,” Pasha said. “Muslims are very easy targets in this country.”

“Homeland” Co-Creator Howard Gordon, who is Jewish, told TheWrap, “There’s a difference between recognizing and discussing the danger of terrorism and exploiting the climate of fear in this country. We have a responsibility to remember what we all have in

The Anti-Defamation League on Friday called Donald Trump’s claim “deeply troubling” and “reminiscent of darker days in American history when others were singled out for scapegoating.”

But some believe that although this is a new low — even for someone like Trump known for making outrageous statements about minority groups — it could end up having a positive effect in Hollywood.

The Muslim Public Affairs Council’s Hollywood Bureau, which serves as a bridge between the Muslim community and the entertainment industry, said it had received “dozens” of phone calls from Muslim, Christian and Jewish members of the entertainment world offering words of support.

“In one way, the human community is coming together in Hollywood,” Suhad Obeidi, director of the MPAC Hollywood Bureau, told TheWrap.

Trump’s latest anti-Islamic rhetoric comes at at time when the entertainment industry seems to have turned a corner in its portrayal of Muslims on film and TV. In September, actress Regina King won her first Emmy for her sympathetic portrayal of a Muslim woman in ABC’s “American Crime.” And one of this season’s breakout hits, “Quantico,” includes an FBI recruit in a hijab (played by a Lebanese actress of Palestinian and Egyptian descent, Yasmine Al Massri).

Also Read: Donald Trump Doubles Down After Obama Muslim Backlash: 'Am I Morally Obligated to Defend the President?'

But while she doesn’t think Muslims will be rounded up and forced into internment camps anytime soon, Obeidi does worry about the impact Trump’s words could have, especially on young Muslims.

A recent study by the Council on American-Islamic Relations showed about 55 percent of the Muslim students surveyed said they’ve been bullied or discriminated against, twice the number of students nationally who reported being bullied.

About 29 percent of students who wear hijabs said they experienced offensive touching or pulling of their hijab. “We are fearful it’s going to lead to our civil rights being impacted,” she said.