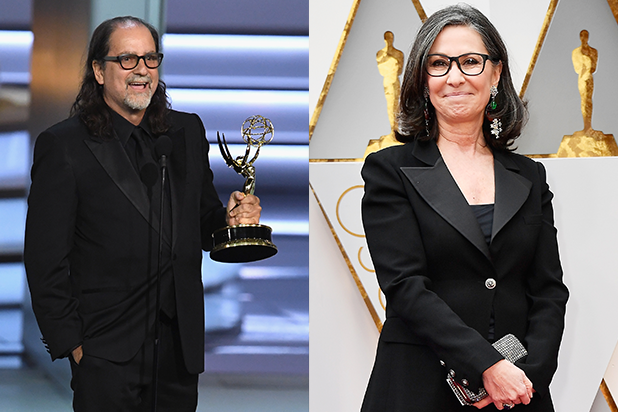 This marks Weiss’ fourth consecutive year helming the Oscars. And yes, he is the one who proposed to his girlfriend while accepting an award (for his work on the 2018 Oscars) at the Emmys last month.

“Donna and Glenn will infuse new energy and vision into this 91st awards presentation, and we are excited about a broad-based creative relationship with these two artists,” Bailey said in a statement.

“I’m grateful to the Academy and ABC for entrusting me with this very special opportunity,” said Gigliotti. “I’m sure it will prove to be a humbling, exhilarating and completely unique experience. Thankfully, I will have Glenn Weiss by my side every step of the way!”

“I’m so looking forward to being back to help celebrate and honor the film industry and all the talented people behind this year’s movies,” said Weiss. “And I am ‘co-excited’ to be co-producing this year’s show with Donna Gigliotti!”

“We’re thrilled to work with someone as passionate about the Academy as Donna Gigliotti–an Oscar winner and multiple nominee. She and (the now famous) Glenn Weiss are committed to making the most of the innovations we’ve embraced for our 91st Oscars,” said Academy CEO Dawn Hudson.

“Donna Gigliotti has worked on some of the most celebrated films of our time and is uniquely qualified to bring her talent to the most anticipated awards show of the year,” said Channing Dungey, president, ABC Entertainment. “And, thanks to Glenn Weiss, we just experienced the most talked-about moment at the Emmys with his heartfelt onstage wedding proposal. We can’t wait to see how they top that at The Oscars.”

Gigliotti won a Best Picture Oscar for “Shakespeare in Love” and received nods for “Hidden Figures,” “Silver Linings Playbook” and “The Reader.”

Also Read: Jimmy Kimmel Interviews Couple Who Got Engaged at the Emmys - in Bed (Video)

The 91st Oscars will be held on Sunday, Feb. 24, 2019, at the Dolby Theatre in Hollywood, and will be televised live on ABC, as well as in more than 225 countries and territories worldwide.

To the parties go the victors. The Governors Ball, Elton John and Vanity Fair were a sea of gold on Sunday night.

Sam Rockwell, Frances McDormand, Jordan Peele and Kobe Bryant walked away from the Dolby with Oscars, ready to hit the after party circuit.  The Governors Ball, Elton John, and Vanity Fair events continued long after Jimmy Kimmel signed off for the night.