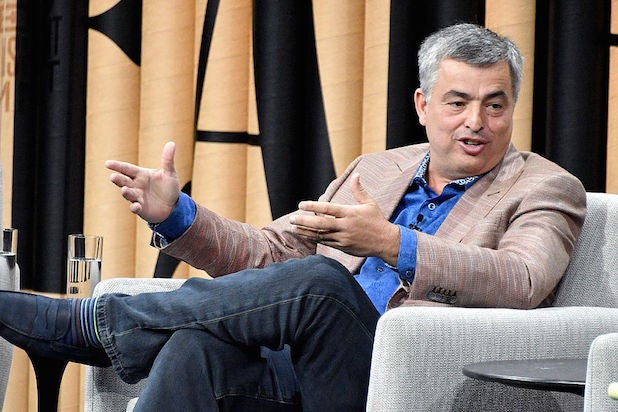 Apple is “all in” on original content and has more cash than several countries — but that doesn’t mean it’s looking to buy Netflix, according to Eddy Cue, senior vice president of software and services.

When asked at South by Southwest in Austin, Texas on Monday if the tech giant would look to buy Netflix or Disney, Cue called them “great partners,” but said a purchase is unlikely.

“Generally the history of Apple — we have not made huge acquisitions,” said Cue, before referencing Wayne Gretzky’s “skate to where the puck is going, not where it is” line.

That puck is headed towards traditional long-form shows for Apple, rather than short-form content, said Cue. Since earmarking $1 billion for new shows last summer, Apple has been targeting Hollywood A-listers as it prepares its slate of original programming. Led by former Sony execs Jamie Erlicht and Zack Van Amburg, Apple has inked deals with Jennifer Aniston, Reese Witherspoon, and “La La Land” director Damien Chazelle. In contrast to Netflix’s content blitz, with hundreds of shows set to be released this year, Cue said less is more when it comes to Apple.

With more than $280 billion in cash on reserve, Apple has been eyed as a potential suitor for Netflix — which is worth about $140 billion. Cue suggested on Monday that Apple would rather build a studio than buy an established content maker. “Money isn’t an issue,” when it comes to making its own shows, added Cue.