Publicists put paparazzi in the same category as really nasty lawyers: You hate having them around. Except when you need ‘em.

On June 3, California’s Assembly drastically toughened up the penalties of the existing state law about stalking and surveillance to specifically protect celebrities and threaten the media, particularly the paps. AB2479 was approved with a vote of 41-12 and sent to the state Senate as its next step. 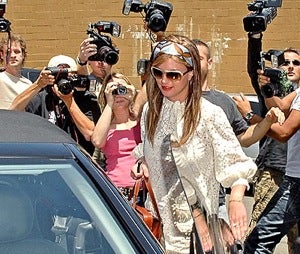 The amendment includes language about “false imprisonment” for the purposes of getting photos, audio or video (whether they’re secured or not), trespass into “personal or familial activity” for such purposes and “physical invasion of privacy…in a manner that is offensive to a reasonable person.”

But what if those violations were incurred at a star’s, manager’s or publicist’s behest?

Most people point to the Britney Spears meltdown of 2008 as the height – or depth – of pap/celeb madness. The mentally fragile young woman was pursued to and from gas stations, fast food joints, clubs and the salon where she infamously shaved off her hair. The defining moment was when she drove in and out of the Westside’s winding roads to the Beverly Hills Hotel, with two dozen SUVs in hot pursuit and a chopper overhead offering play-by-play of the action.

These chases put Spears’ security in jeopardy, not to mention the safety of any innocent passer-by or driver who might’ve accidentally happened into the scrum. It made any thinking adult wonder whether the performer’s seeming emotional problems were nature or nurture.

And I’ve got it on good authority that Spears or people claiming to represent her tipped off the paparazzi to several, if not most, of those precarious outings.

The instances of such tip-offs are far more frequent, and certainly more subtle, than the public imagines.

A personal publicist repping a C-list actress might call a friendly photographer if she’s having a romantic dinner at Il Sole with a better-known actor.

A manager, stylist, PA, masseur or maitre d’ who knows there’s money to be had in exchange for an inside tip might not hesitate to place a call.

Crazy at it might sound, the much-photographed star of a series I handled who had a nasty rivalry with another cast member once dropped a dime on her adversary – partly out of spite but also to score a favor when her own notorious activities might generate unwanted attention again.

It’s not unusual for managers and publicists to maintain a database of paparazzi (I’ve done it for years) just as they do with tabloid writers, editors and producers.

And get a few celebrity-beat journalists together and they’ll share hilarious stories about C- and D-list talent famous for phoning or texting their whereabouts to the media in the hopes of exiting Cut, Chateau Marmont or even the Century City AMC 15 with lights flashing and cameras rolling.

One side says it will finally offer protection to stars and their families, particularly young children, and cut down on personal and public safety risks that such aggressive behavior can generate.

The other side claims the law violates the core freedom of the press and offers public figures the opportunity to cry personal invasion when they simply don’t want to be followed.

Who’s right? They both are.

But there’s another, interesting element in the bill that’s been overlooked in recent media coverage of it.

Simply put: Someone who directs, solicits, induces or causes another to violate this law – and not necessarily through an employer/employee relationship – could be penalized as well with fines and damages.

Which means that a recognizable celebrity name would be just as liable as that nasty paparazzi.

In essence, not only would California law punish the person who took the action, it would go after the person who instigated it. Which raises the possibility of some very interesting accomplices being named by paps who wind up getting nailed.

Assuming the amendment gets passed in the Senate, it’s likely to be road-tested fairly quickly, especially since it retroactively covers any incidents back to Jan. 1, 2010. Go check the archives of Splash News or x17online to wager what might be the debut case.

But it promises to be a wobbly process.

Without a doubt, there are some professional paparazzi who are truly threatening, ruthless, dangerous and reprehensible characters. And over the past decade, there’s been an increasing number of peculiar, often downright scary individuals without affiliation, portfolio or any journalistic sensibility who have entered the fray for private reasons.

But the majority of the paps, like them or not, know the secret rules of Hollywood and how to work with them.

And very often their partners in crime, so to speak, are those in the business – sometimes celebrities themselves – desperate for attention, with a skewed sense of PR or out to cause a little trouble. Or simply looking for some additional income.

As well-intentioned as AB2479 is, I’ve got doubts that a bunch of mostly small-town elected officials working from the State Assembly chamber in Sacramento have much insight into how the complicated, private and often devious Hollywood game is played.