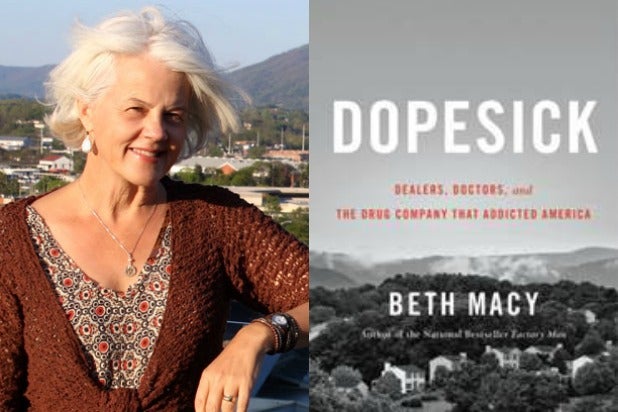 The American opioid crisis is jumping from a real-life problem to a show on the small screen.

Littlefield and Macy will serve as executive producers on the project, with Peter McGuigan and Richie Kern producing.

“Every once in a while, you come across a piece of material that is that rare diamond in that it’s an incredibly arresting story, and, even more, is timely and important,” Bert Salke, President, Fox 21 Television Studios said. “Beth’s dissection and thoughtful emotion in detailing the opioid crisis that now plagues our country, is as compelling a story as I have seen. Warren and Fox 21 are truly excited to build the perfect team, beginning with identifying the perfect writer to bring this series to life. It’s a huge priority.”

Littlefield, who also executive produces “Fargo” at FX and has the pilot “Reprisal” in the works at Hulu, added: “Beth has written a book that holds up a mirror to where America is right now and why. Through deeply emotional true stories and an understanding of the systems that failed us, Beth has painted a powerful and important portrait of our country. Until America better understands the issue it will remain a place where getting addicted is much easier than securing addiction treatment. Television can shine a klieg light on this. We look forward to working closely with Beth and our Fox 21 partners to bring this property to life on television.”

“I write it the only way I know how – by witnessing the epidemic’s landing in three Virginia communities over two decades and getting to know the people on the front lines,” Macy said, “From distressed small communities in central Appalachia to wealthy suburbs, from disparate cities to once idyllic farm towns, it’s a heartbreaking trajectory that explains how the national crisis became so entrenched. This book illuminates the persistent and often conflicting gaps in the treatment and criminal-justice landscapes while shining a hopeful light on the heroes battling the worst drug epidemic in American history.”

“Dopesick: Dealers, Doctors, and the Drug Company That Addicted America,” was published by Little, Brown and Company and is currently No. 5 on the New York Times Best Seller list for Combined Print & E-Book Nonfiction.

Macy’s best-sellers include “Truevine” and “Factory Man.” She is based in Rhode Island, Virginia,  and has won more than a dozen national awards, including a Nieman Fellowship for Journalism at Harvard, for her reporting.