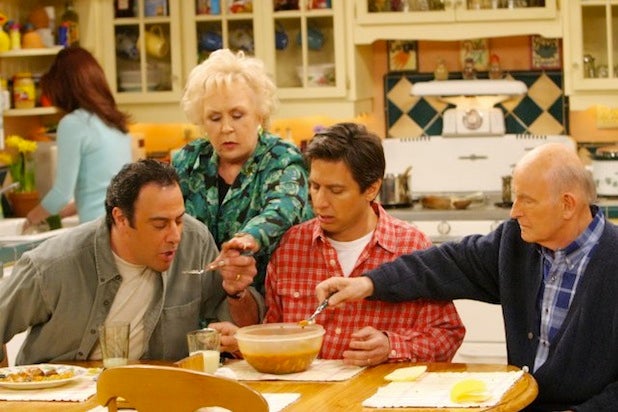 Ray Romano offered a heartfelt remembrance of his TV mother Doris Roberts on Monday, following news that the actress had died at age 90.

In a statement provided to TheWrap, Romano, who played sportswriter Ray Barone on the sitcom “Everybody Loves Raymond,” said that Roberts “had an energy and a spirit that amazed me.”

“Doris Roberts had an energy and a spirit that amazed me. She never stopped,” Romano said.”Whether working professionally or with her many charities, or just nurturing and mentoring a green young comic trying to make it as an actor, she did everything with such a grand love for life and people and I will miss her dearly.”

“Everybody Loves Raymond,” which featured Roberts as overbearing and completely biased mother Marie Barone, ran for nine season on CBS.

Brad Garrett, who played the other, less-favored Barone son Robert on the show, also offered his remembrances.

“I am deeply saddened by the passing of Doris Roberts, an amazing lady and brilliant actor,” Garrett said in a statement. “Doris was vibrant and full of life both on and off the stage, and I am so grateful we shared so many wonderful memories. I will miss her greatly and will always remember her incredible kindness, humor, talent and heart.”

In her own statement Monday, Patricia Heaton, who played Marie Barone’s long-suffering daughter-in-law Debra, offered, “Truly the end of an era.” Calling Roberts “my wonderful TV motherin-law,” Heaton noted that the actress “was a consummate professional from whom I learned so much. She was funny and tough and loved life, living it to the fullest.”

Roberts won five Emmy awards in her lifetime, four for her performances on “Raymond” and a fifth for an appearance on “St. Elsewhere.” She also won a Screen Actors Guild Award for her work on “Raymond.”

Roberts was married twice. She wed writer Michael Cannata, with whom she had a son, in 1956. Her second marriage, to writer William Goyen, lasted from 1963 until his death from leukemia in 1983.

In addition to her son, Michael Cannata, Jr., Roberts is survived by three grandchildren.

Doris Roberts' 7 Most Memorable Roles, From 'Everybody Loves Raymond' to 'Christmas Vacation' (Photos)

The actress, who died Sunday at age 90, made a career of creating unforgettable film and TV roles